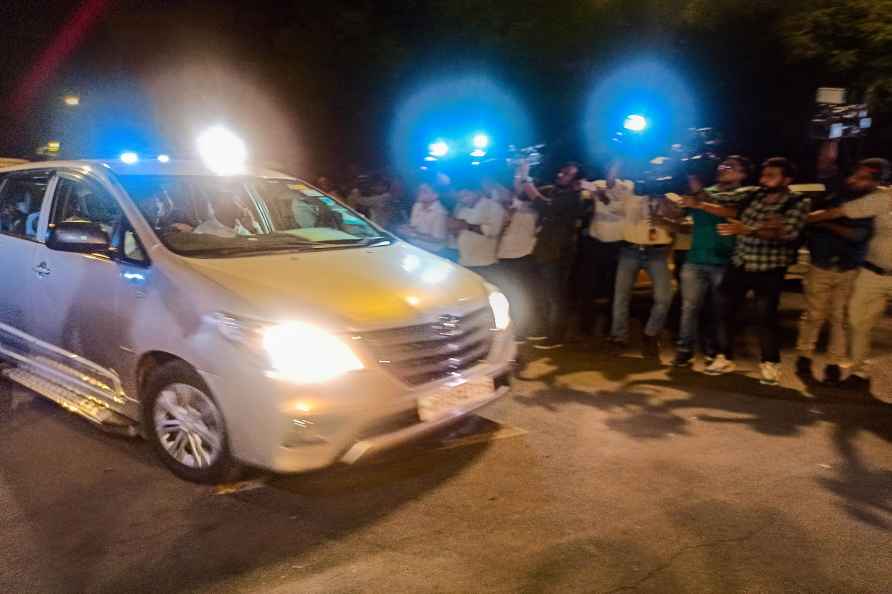 [New Delhi: The convoy of Congress leader Rahul Gandhi leaves the Enforcement Directorate (ED) office after questioning in the National Herald case, in New Delhi, Wednesday, June 15, 2022. ( /PTI] New Delhi, June 15 : Congress leader Rahul Gandhi on Wednesday reached Enforcement Directorate (ED) office to join the investigation in connection with the National Herald case for the third consecutive day. For the last two days, Rahul Gandhi was questioned for about 18 hours. A three-member team is recording his statement. Gandhi's questioning ended at about 10 p.m. on Tuesday but he left the ED headquarters at around 11.45 p.m. On Monday, his questioning had ended at about 9 p.m. but he reportedly wanted to correct a few things in his statements and due to this, he had to wait for more hours at ED headquarters. On Monday, Gandhi was questioned by agency officials for several hours. He was given a lunch break after three hours, and went to meet his mother, and Congress President Sonia Gandhi, who is undergoing treatment at Sir Ganga Ram Hospital. After this, he returned to the ED's headquarters where he was again questioned till late in the night. Gandhi was questioned about a few transactions made by Kolkata-based Dotex Merchandise Pvt Ltd. Sonia Gandhi has also been summoned in the matter. She is likely to appear before ED on June 23. /IANS

N.Korea's UN mission slams US over criticism of its nuke programme

Seoul, Aug 4 : North Korea's permanent mission to the UN has issued a rare press statement in response to US condemnation of its nuclear programme, according to state media on Thursday. It slamm […]

Gaza, Aug 4 : Hamas leader Ismail Haniyeh said that the threats of Israeli Defence Minister Benny Gantz against the Gaza Strip were unacceptable, amid rising tensions after Israeli soldiers arrested a […]

Tokyo, Aug 4 : An earthquake with a preliminary magnitude of 5.6 struck off the coast of Fukushima prefecture in Japan on Thursday, the weather agency said, although no tsunami warning has been issued […]

Brisbane, Aug 4 : Police in the Australian state of Queensland said on Thursday that three people had died following a gun shooting on a rural property. At 9 a.m., police were called to the scen […]