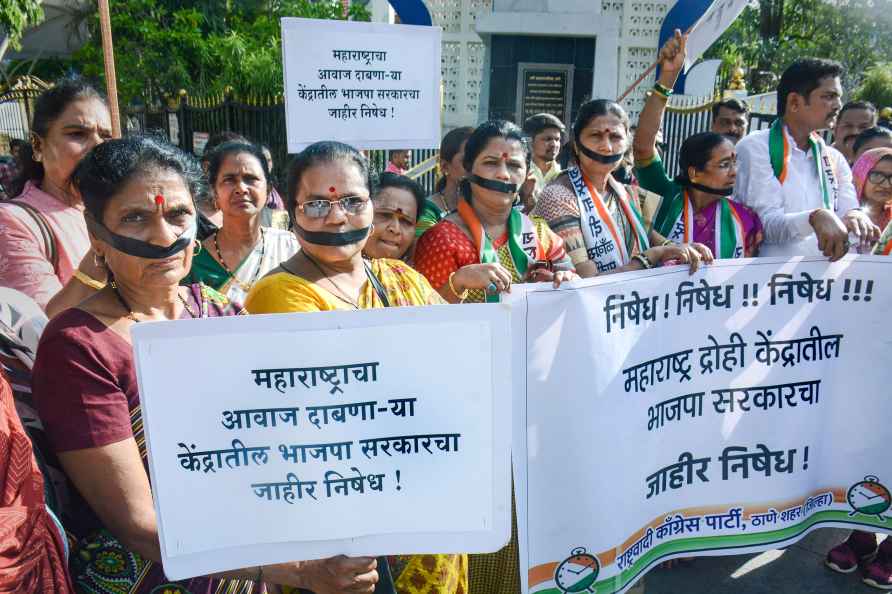 [Thane: Thane Nationalist Congress activists stage a protest after NCP leader and Maharashtra Deputy Chief Minister Ajit Pawar was allegedly not allowed to speak during Prime Minister Narendra Modi's event in Pune on Tuesday, in Thane, Wednesday, June 15, 2022. ( /PTI] By Vishal Gulati Dharamsala, June 15 : For the Tibetans in exile, Prime Minister Narendra Modi's two-day visit to Dharamsala beginning Thursday has given rise to the pious hope of his meeting with their spiritual leader the Dalai Lama, who has lived in exile in northern India for over six decades. The expectation stems from the fact that Modi had only recently spoken with the Dalai Lama to convey greetings on his 86th birthday and wished him a long and healthy life. The Indian functionalities see the probable meeting -- the first publicly with the globetrotting aging Buddhist monk, feted by some of the world's top leaders, since he took over as Prime Minister in 2014, is an attempt with spiritual, political and diplomatic ramifications. The engagement can be seen in the context to send a stern warning amid relations between India and China worsening in the recent months and in a strategic shift that India is behind the Dalai Lama for any decision he takes on his reincarnation. Also India will try to signal to the US the intent to raise the profile of the Tibet issue at a time when the US administration passed the Tibetan Policy and Support Act in 2020, making it clear that only the Dalai Lama should have control over his reincarnation, not complying with China's laws to impose its sanctioned successor. The Indian leaders and officials have generally been cautious about public contact with Tibet's spiritual leader to avoid upsetting Beijing, who regards the spiritual leader as a dangerous "splittist", or separatist, and frowns on any engagement with any political leader. Responding to Modi's gesture, the Dalai Lama congratulated him on his birthday on September 17, 2021 by saying, "As the most populous democratic nation in the world, India's success benefits not only the people of India, but also contributes to the development of the world as a whole." Even after the 2014 parliamentary elections, Modi had thanked the Dalai Lama for his congratulatory message. Tibetan leaders in Dharamsala are hopeful of the Dalai Lama-Modi meeting with the Central Tibetan Administration (CTA) headed by democratically elected Penpa Tsering clarifying last year that His Holiness is expected to meet Modi after the Covid-19 situation stablises. According to the CTA, His Holiness has travelled across 60 countries on 300 different occasions and has met over 490 world leaders, including presidents, prime ministers, chief ministers, judges, leaders of political parties, and spiritual leaders of different religious traditions. The Nobel Peace laureate has also delivered speeches at over 60 renowned universities and research institutes and has received over 140 awards, including 50 honorary degrees in the US alone. The Dalai Lama is also the recipient of over 150 global awards, including the Nobel Peace Prize, UN Environment Award, US Congressional Gold Medal, John Templeton Award, etc. In India, he several times met with the BJP leaders, including party veterans -- former Prime Minister Atal Bihari Vajpayee and former Deputy Prime Minister L.K. Advani, Presidents Ram Nath Kovind and Pranab Mukherjee, and Congress leader and Prime Minister (2004-14) Manmohan Singh. At an event in January 2016 to celebrate the Dalai Lama's 80th birthday, Manmohan Singh referred to His Holiness as a gift of God to the world. "My encounters with him have always left me more at peace with my life," he had said. "Ours is a land of rishis and he is one of them helping guide the country on a righteous path. In these turbulent times, he teaches us to combine our spiritual values with our use of science and technology for material development. I can only pray that he lives long so the people of India, of Asia and the world may benefit from his blessings." However, a scheduled meeting between BJP president Amit Shah and the Dalai Lama, who has always enjoyed the status of a "holy leader" since he came to India in 1959, on May 2, 2015, in Dharamsala was cancelled at the last minute as Modi did not want to upset Beijing with the meeting. The elderly monk, known for his simplicity and jovial style, prefers to participate in meetings with religious leaders, and lectures businessmen on ethics for the new millennium and the art of happiness. He chuckles throughout his talk and often slaps visitors on the back. India is home to the Dalai Lama and some 100,000 Tibetan exiles. The Dalai Lama is based in this northern hill town. The 14th Dalai Lama was born on July 6, 1935, in a small village in the remote Amdo region of Tibet. (Vishal Gulati can be contacted at vishal.g@ians.in) /IANS