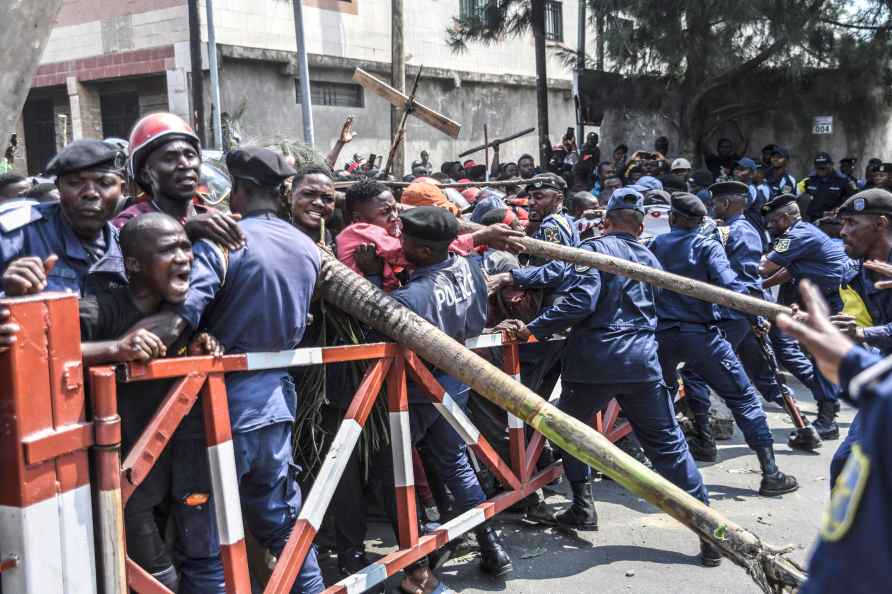 [Goma: Demonstrators are stopped by police as they try to march towards the border with Rwanda, in Goma, Democratic Republic of Congo, Wednesday June 15, 2022. Congo?Äôs military is accusing Rwanda of ?Äúno less than an invasion?Äů after a rebel group captured a key town in eastern Congo. The military confirmed late Monday that Bunagana had fallen into rebel hands earlier in the morning. /PTI] Hyderabad, June 15 : Gudatipally village in Siddipet district of Telangana is on the boil as people whose lands were acquired for building a reservoir are on the warpath demanding fair compensation. The village and its surroundings have been witnessing protests, arrests and police lathicharge for the last three days. The entry of opposition parties Congress and the BJP in support of the oustees has turned Gauravelli reservoir into a flashpoint. The protest by the oustees turned violent on Tuesday when they staged a sit-in after police foiled their attempt to lay siege to local MLA V. Satheesh's official residence. Some people, said to be workers of the ruling Telangana Rashtra Samithi (TRS), attacked the protesters, injuring a few. The protesters were enraged at the police allowing TRS workers to attack them. The oustees and those supporting them pelted stones at the police injuring a few personnel. The police then resorted to a lathicharge and arrested some youths. The oustees later staged a protest at the police station demanding their release. This came a day after a heavy police force entered Gudatipally village in the wee hours of Monday and took several people into custody. The police said it took some people into preventive custody as they were planning to stop officials from conducting a survey for trial runs. The police came under attack from all opposition parties for its action. All India Congress Committee member Bakka Judson lodged a complaint with the National Human Rights Commission against the police. The area remained tense on Wednesday as the villagers continued their protest. "There is no question of calling off our protest. We will continue to fight till we get the compensation," said a farmer. The oustees have vowed not to allow the authorities to go ahead with the work till they are given fair compensation. Kisan Congress national vice-president Kodanda Reddy and former Congress MP Ponnam Prabhakar visited Husnabad and expressed solidarity with the protesters. They demanded that the relief & rehabilitation package, double bedroom houses and compensation as per the Land Acquisition Act, 2013 be extended to all those eligible. The Congress leaders along with the protesters tried to march to Finance Minister Harish Rao's house with a convoy of trucks but were stopped by the police. Police officials held talks with the Congress leaders and protesters and allowed 10 persons to proceed. Meanwhile, Harish Rao alleged that the opposition parties have conspired to deny water for irrigation to the farmers of Husnabad. He said the Congress and the BJP were trying to extract political mileage from the issue. He said the opposition parties had similarly stalled the work on Mallanna Sagar and Kondapochamma Sagar reservoirs. Stating that the government has paid compensation to 98 per cent of the oustees, he appealed to the people not to fall into the trap of the opposition parties. Harish Rao said the officials have already acquired 3,816 acres of land and only 84 acres are left to be acquired. He pointed out that the oustees are being paid a compensation of Rs 15 lakh per acre. Out of the 937 families identified for the relief and rehabilitation package, compensation is to be paid to only two per cent oustees. "The reservoir is designed to provide irrigation water to one lakh farmers in Husnabad. Should we stop the project for the sake of two per cent people," he asked. The reservoir, which will get Godavari river water, was first designed in 2007 in undivided Andhra Pradesh for 1.14 tmcft. After the formation of Telangana state, it was redesigned as part of the Kaleshwaram project and the capacity was increased to 8.3 tmcft. Godavari water will flow from the Kaleshwaram Lift Irrigation Scheme (KLIS) to the Mid Manair Dam and from there the water will be diverted to Thotapalli reservoir and then to the pump house of the Gauravelli project. The authorities are going ahead with the work for the initially proposed dry run for 1.141 tmcft. As the motors to pump water into Gauravelli reservoir were brought from China and Japan, the officials are working to conduct the dry run to test their functioning. The project is likely to submerge Gudatipally village. If the work is taken up for the full capacity of 8.3 tmcft, it is likely to submerge seven other surrounding villages. The problems cropped up due to the difference in the amount of compensation paid to the oustees. Some oustees who were minors when their lands were acquired and have now become major are refusing the Rs 2 lakh compensation being offered to them. Some who had agreed to take plots are now demanding money as compensation. /IANS