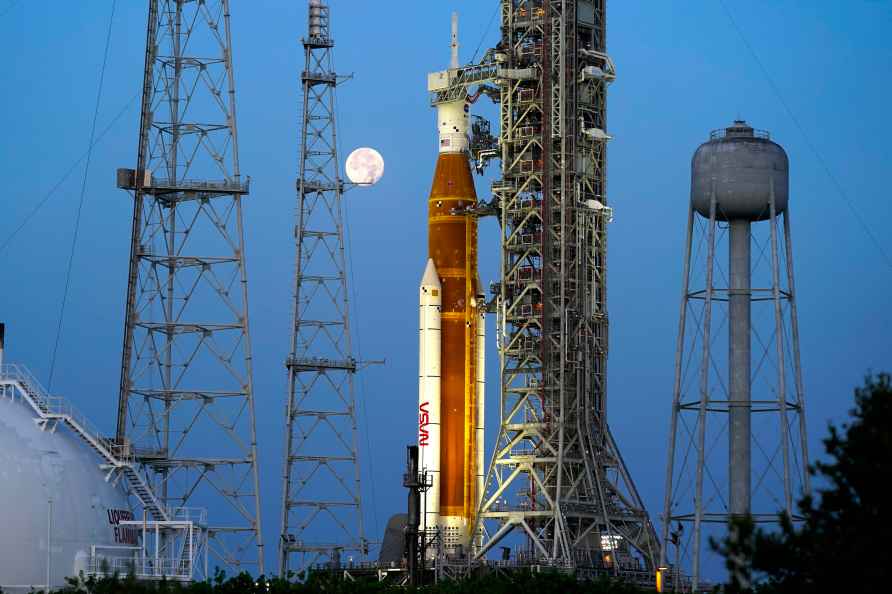 [Cape Canaveral:The Strawberry Supermoon sets in front of the NASA Artemis rocket with the Orion spacecraft aboard on pad 39B at the Kennedy Space Center, Wednesday, June 15, 2022, in Cape Canaveral, Fla. Artemis is undergoing tests at the pad before an unmanned mission to the moon. /PTI] San Francisco, June 15 : SpaceX will get ready to take off its first orbital flight in July, Founder and CEO Elon Musk has said. This comes as the company received environment clearance from the US Federal Aviation Administration (FAA) for developing and testing its giant Starship rocket launch vehicle at the Starbase site in Texas. "Starship will be ready to fly next month," Musk said on Twitter. "I was in the high bay and mega bay late last night reviewing progress. "We will have a second Starship stack ready to fly in August and then monthly thereafter," Musk said. However, before the orbital test mission launch SpaceX needs a passing grade from the FAA. The licence application is still pending. The FAA review, known as a programmatic environmental assessment (PEA), which gauged the environmental impacts of SpaceX's Starbase site in Texas, concluded that the company's plans would not result in significant impacts to the environment. It has, however, asked SpaceX to make more than 75 changes to its proposal for the Starbase facility to mitigate environmental impacts from its proposed plan. SpaceX also must meet FAA safety, risk, and financial responsibility requirements before a licence is issued for any launch activities. SpaceX is developing Starship to take people and cargo to the moon, Mars and beyond. NASA has already signed on, picking Starship as the first crewed lunar landing system for its Artemis moon programme. Starship consists of two elements, a spacecraft called Starship and a giant first-stage booster known as Super Heavy. Both will be fully reusable, and both will be powered by Raptors, six for the final Starship and 29 for Super Heavy. /IANS