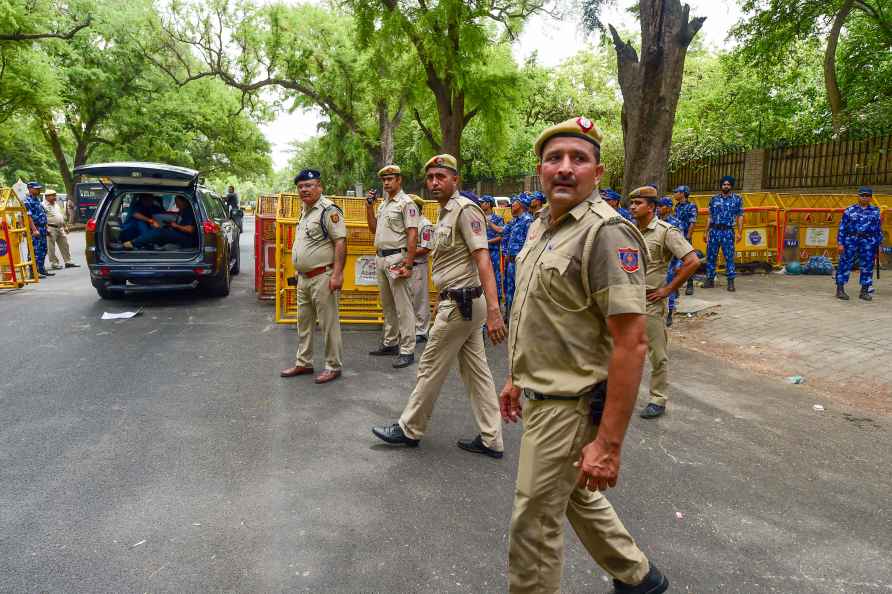 [New Delhi: Police personnel outside the AICC headquarters during a protest march by the Congress party over ED's summoning of Rahul Gandhi in the National Herald case, in New Delhi, Tuesday, June 14, 2022. ( /PTI] New Delhi, June 14 : As Congress leader Rahul Gandhi appeared before the Enforcement Directorate (ED) for a second day on Tuesday in the National Herald case, a number of party workers, who were protesting outside the probe agency's office, were detained by the Delhi Police. The Congress workers had assembled outside the ED office in a show of solidarity with their leader. The detained protesters were taken to the Kapashera board by bus. The Delhi Police had already beefed up security in and around the probe agency's headquarters before a three-member team started Rahul Gandhi's questioning. Paramilitary forces have been deployed in the area to avoid any untoward incidents. The police is also checking each and every vehicle heading in that direction. Rahul Gandhi reached the ED office at 11.07 a.m. on Tuesday morning and directly went inside without speaking to the media. On Monday, he was grilled for about 10 hours. /IANS

We will not put pressure on ourselves just thinking about T20 World Cup: Moeen Ali
[Karachi: A photograph of Queen Elizabeth II is displayed on the big screen as players of England team stand for their national anthem before the star

Thiruvananthapuram, Sep 20 : The tiff between Kerala Governor Arif Mohammed Khan and the ruling CPI-M led Left led by Chief Minister Pinarayi Vijayan appears to be escalating as on Tuesday the party o […]

Los Angeles, Sep 20 : Actress Kate Winslet has returned to work after being injured on a film set in Croatia. The 46-year-old actress was pictured getting back into character today after she was […]