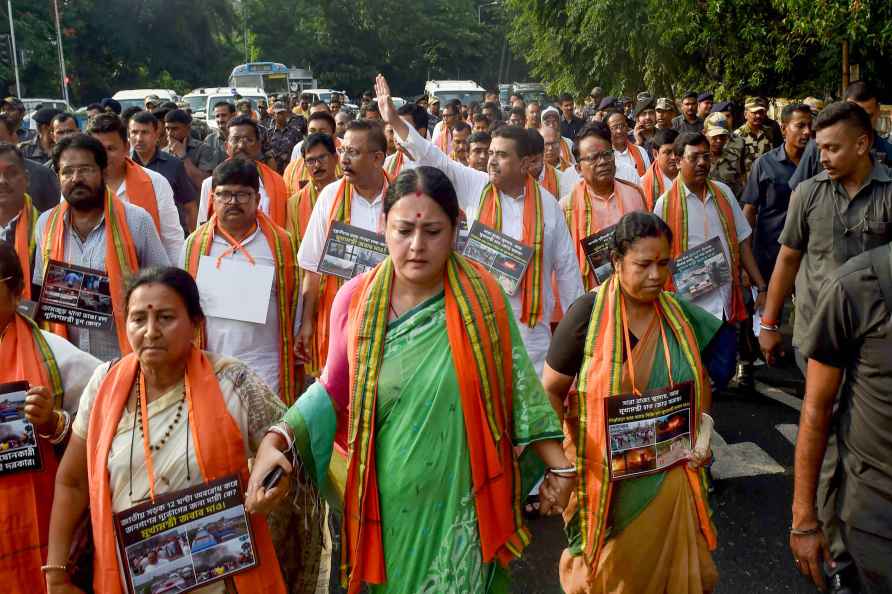 [Kolkata: Leader of Opposition in West Bengal Assembly Suvendu Adhikari, BJP Mahila Morcha President Agnimitra Paul and party leaders take out a protest march over the law and order situation in the state, in Kolkata, Monday, June 13, 2022. ( /PTI] Kolkata, June 13 : The Kolkata police has issued summons to suspended BJP leader Nupur Sharma over her controversial comments about Prophet Muhammad which led to violence in certain pockets of West Bengal. The summons have been issued by Narkeldanga Police Station, under Eastern Suburban Division of Kolkata police under Section 41A of the Code of Criminal Procedure, 1973. Sharma has been asked to be present at the police station on June 20. City police sources said that the summon has been issued following a complaint that her controversial comments have triggered violence in different parts of West Bengal. The Bhiwandi City Police under Thane district in Maharashtra has already issued a notice to Sharma over the same issue and asked her to be present at Pydhonie police station at 11 a.m. on June 25. However, Sharma's counsel has replied to the Bhiwandi city police seeking more time to appear for the questioning. Since last Friday, violence has erupted in several areas of West Bengal over the controversial comments by Sharma, which have evoked widespread protests throughout the country, following which the BJP suspended her from the party. The BJP also suspended another leader Naveen Jindal who shared her comments on Twitter. Tension built up mainly in the minority dominated Uluberia, Domjur and Panchla areas in Kolkata, adjacent to Howrah district. It gradually spread to the minority dominated pockets in other districts of West Bengal like Murshidabad and Nadia. Clashes erupted between the agitators and police in which Domjur police station was attacked, police vehicles were torched and several police personnel were injured. Internet services have been suspended in several areas. While warning of strict action against the agitators, Chief Minister Mamata Banerjee has held the BJP responsible for instigating the violence. Several senior state BJP leaders including the party's state president and party MP, Sukanta Majumdar have demanded immediate deployment of central armed forces in the disturbed areas. /IANS

DW BUREAU / Bilaspur The State during the last 75 years has not only grown by size in terms of area and population, but has also achieved quite a few distinctions in different fields. This was st […]