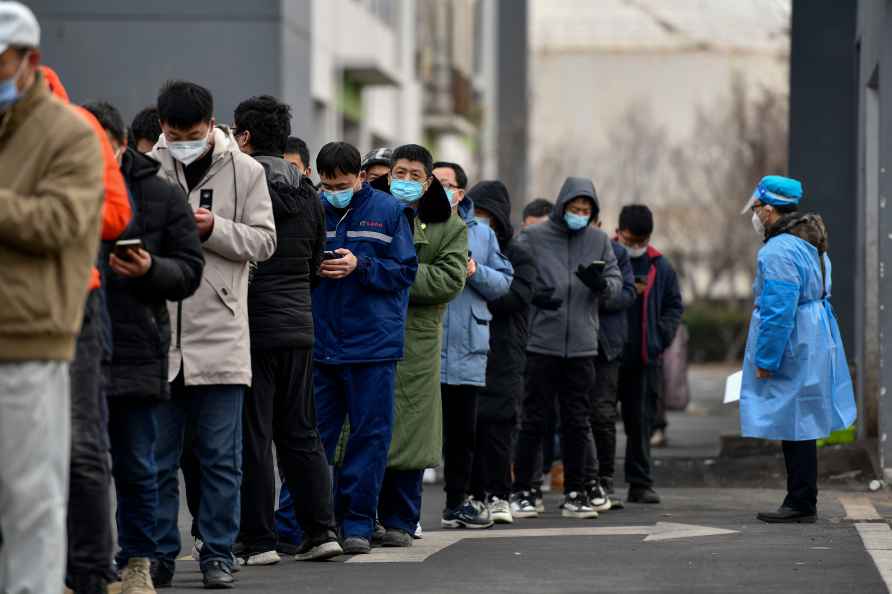 Shanghai, June 11 : Shanghai will carry out Covid-19 testing on more than half of its 25 million residents this weekend, fuelLing fears of a return to more stringent restrictions just days after the financial hub emerged from two months of painful lockdown, media reports said. The mass testing announcements sparked fears of a return to stringent, prolonged lockdown among Shanghai residents, many of whom had been confined to their homes for two months or more since March, CNN reported Those fears have triggered panic buying. On Thursday, Shanghai residents rushed to supermarkets to stock up on food and other daily necessities, forming long lines at checkouts and leaving shelves empty, according to photos and videos that circulated on social media, it reported. At least seven of the city's 16 districts, with a combined population of 15 million people, will roll out mass testing over the weekend, Zhao Dandan, deputy head of the Shanghai Municipal Health Commission, said at a news conference. The districts include Shanghai's most populated areas and busy business hubs, such as Pudong and Xuhui. Districts that have reported positive cases since Shanghai lifted its citywide lockdown on June 1 will be placed under "closed management" during the collection of test samples, Zhao said. She did not specify how long the sampling period will last. In China's zero-Covid policy lexicon, "closed management" usually refers to restrictions that bar people from leaving their residential communities or workplaces, CNN reported. Changning district, home to the Shanghai Hongqiao International Airport and 700,000 residents, announced on its official social media account that it will carry out mass Covid testing on Saturday. "During the sampling period, closed management will be enforced on residential communities, where (residents) can only enter but not leave," the statement said. Earlier on Thursday, Songjiang district also said on social media that its 1.9 million residents are all required to undergo Covid testing over the weekend, CNN reported. /IANS