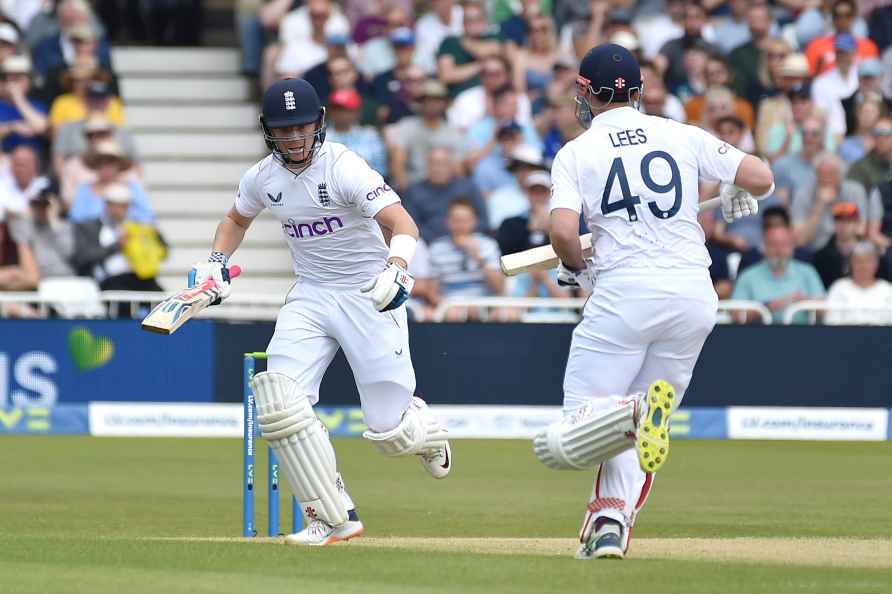 [England's Ollie Pope, left, and England's Alex Lees run between wickets during the third day of the 2nd test match between England and New Zealand at Trent Bridge in Nottingham, England, Sunday, June 12, 2022. /PTI] Nottingham, June 12 : Ollie Pope (51 not out) and Alex Lees (34 not out) helped England to a steady start, taking them to 90/1 at stumps on Day 2 of the second Test after New Zealand posted 553 in their first innings on the back of a fantastic 190 from Daryl Mitchell, here on Saturday. Resuming the play on Day 2, both Mitchell (overnight 81 not out) and Blundell (overnight 67 not out) continued from where they left. They continued to frustrate the England bowlers as boundaries flowed from the bat with regularity. Mitchell got to his century soon, his second in as many matches, as New Zealand pushed past 350. A few overs later, Blundell brought up two milestones of his own Ā? going past 1000 Test runs as well as his third Test hundred. In the meantime, Mitchell switched gears and launched into the England bowlers, taking their partnership past 200. It was Jack Leach, who brought some respite for England as Blundell charged and miscued the ball to mid-on. This was Leach's first wicket at home in exactly 1000 days, his last one coming against Australia in the 2019 Ashes in September 2019. That was the lone positive for England in the first session where New Zealand added 94 runs and strengthened their hold on the game. The Black Caps' domination continued after the break as well with the first two overs of the second session fetching 26 runs. Michael Bracewell looked to attack from the get-go while Mitchell was smashing big ones with ease against Leach. In no time, he reached 150 Ā? a milestone he had never achieved before in Test cricket. In the first 13.2 overs of the session, New Zealand added 69 more runs, going at more than five runs an over. Just as they threatened to take the game away completely, the rain break came at a perfect time for England, forcing players off the ground in a hurry for an early tea. Upon their return, the two batters took their time to get their eyes in and showed very little aggression. Bracewell was just a run away from his fifty on Test debut when James Anderson struck to break the partnership for 91, an ICC report said. Mitchell kept losing partners as he edged closer to a double ton. Despite Trent Boult's resistance at No.11, Mitchell was the last man out when Matthew Potts got his wicket for 190. New Zealand ended up posting a mammoth 553, their highest total on English soil. In reply, it did not take New Zealand long to effect a breakthrough as Boult struck in the second over to send back Crawley for 4. With the hosts 6/1, New Zealand had a good chance to drive home their advantage but failed to take control. Alex Lees was dropped on 12 by Mitchell at first slip and took full advantage of it by playing some brilliant shots. His partner Ollie Pope too continued undisturbed, even striking Matt Henry for 16 runs in one over. Another chance went begging when neither the keeper nor the first slip fielder reacted to an edge from Pope, which raced away to the boundary. Pope soon brought up a fantastic fifty as the second-wicket partnership extended to 84 with England ending the day on 90/1, trailing by 463 runs. Brief scores: New Zealand 553 (Daryl Mitchell 190, Tom Blundell 106, Michael Bracewell 49; James Anderson 3-62, Ben Stokes 2-85) lead England 90/1 (Ollie Pope 51 not out, Alex Lees 34 not out; Trent Boult 1-18) by 463 runs. /IANS

New York, Aug 13 : Covid-19 has caused unprecedented stressors as a new study showed a rise in pregnancy-related complications during the pandemic. The study, published in the journal JAMA Netwo […]