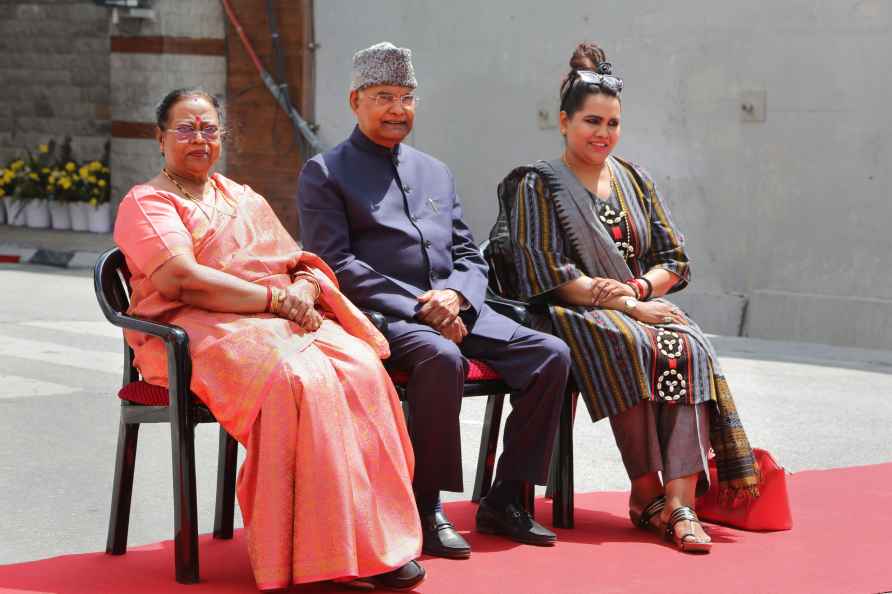 Manali, June 11 : President Ram Nath Kovind on Saturday visited the Atal Tunnel Rohtang near here in Himachal Pradesh. He was accompanied by Governor Rajendra Vishwanath Arlekar and Chief Minister Jai Ram Thakur. The engineering marvel the Atal Tunnel connects Manali with landlocked Lahaul-Spiti district. The President evinced keen interest in the Sisu lake, the Chandrabhaga river, a waterfall and the Lahaul Valley near the helipad. President's wife, Savita Kovind, and his daughter were also present on the occasion. Earlier, the President on his arrival at the Sisu helipad was received by the Governor and the Chief Minister, who presented a traditional Thangka painting to the President. On the South Portal of the Atal Tunnel, Chief Engineer of the Border Roads Organization, Jitendra Prasad, apprised the President about the construction of Atal Tunnel and regarding other important tunnels to be built on the Manali-Leh road in future. The President was given warm send off by the Governor, the Chief Minister, Technical Education Minister Ram Lal Markanda, Education Minister Govind Singh Thakur, Chief Secretary Ram Subhag Singh, Director General of Police Sanjay Kundu and Principal Secretary GAD Bharat Khera at SASE Helipad, Manali, on the conclusion of his two-day visit to the state. /IANS

[Gurugram: Police personnel try to disperse farmers, blocking the National Highway-48, during their protest against the proposed acquisition of 1,810 acres of land in three villages of Manesar and dem […]