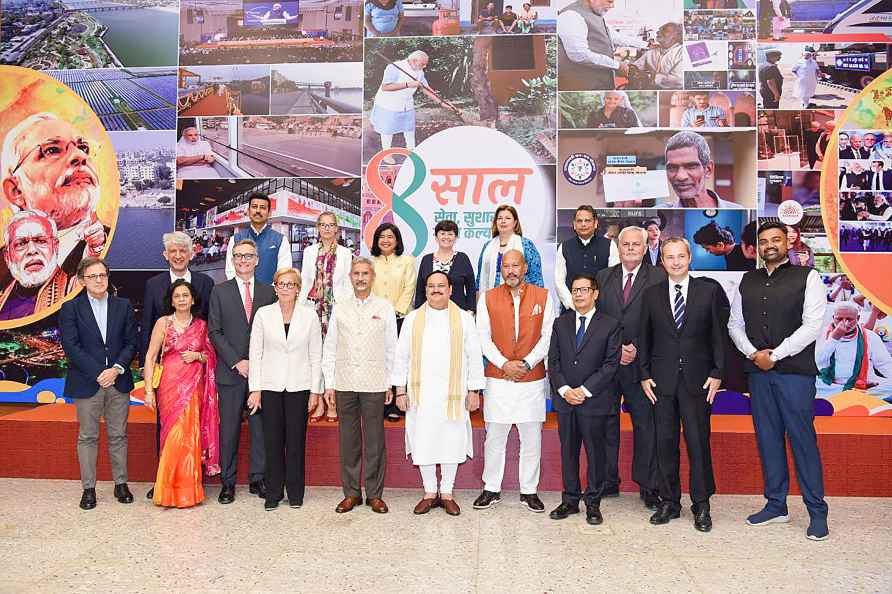 [**EDS: TWITTER IMAGE POSTED BY @JPNadda ON SATURDAY, JUNE 11, 2022** New Delhi: BJP National President J.P. Nadda and External Affairs Minister S. Jaishankar during an interaction with the envoys of 13 different countries, at BJP headquarters in New Delhi, Saturday, June 11, 2022. ( /PTI] New Delhi, June 10 : BJP chief J.P. Nadda will interact with head of missions from 13 countries on Saturday (June 11) at the party headquarters here. On its 'Foundation Day' on April 6, BJP chief Nadda launched the new initiative 'Know BJP' specifically to address the overseas audience. This is the fourth event of this series. "The BJP chief has so far interacted with 34 mission heads during the previous three events. After the event on June 11, the next events of this series are scheduled on June 13 and June 15," the party said in a statement. Under the 'Know BJP' initiative, the party will present detailed information on its historical journey, ideology, structure and ongoing activities. During this event, Nadda will elaborate on the history, struggles, successes, ideology and contribution of the BJP and its governments in nation building. During the interaction on Saturday, BJP national spokespersons Rajyavardhan Singh Rathore and Guru Prakash Paswan, party in-charge of foreign affairs department Vijay Chauthaiwale and few other party leaders will also join Nadda. During the interaction, Nadda will also address the queries from the distinguished guests. A documentary film depicting the journey of Jan Sangh and Bharatiya Janata Party will also be shown during the programme. In the first interaction on April 6, Nadda interacted with heads of 13 missions. Earlier, on May 16, Nadda interacted with foreign envoys of 14 countries. On June 4, Nadda interacted with the heads of mission of seven countries under the party initiative 'Know BJP'. /IANS

By Niharika Raina New Delhi, Aug 5 : With India's T20I series against the West Indies set to end on Sunday, the senior men's selection committee is expected to announce the squad for the 2022 Asia […]

[Police section off the site where an SUV came to an abrupt stop after a driver careened through the parade route of the Intertribal Ceremonial Centennial Celebration. in Gallup, New Mexico, Thursday, […]

Cong MPs begin their march from Parliament to Rashtrapati Bhavan

New Delhi, Aug 5 : Congress parliamentarians began their protest march from Parliament to Rashtrapati Bhavan over the rising figures of inflation and unemployment in the country. To register the […]