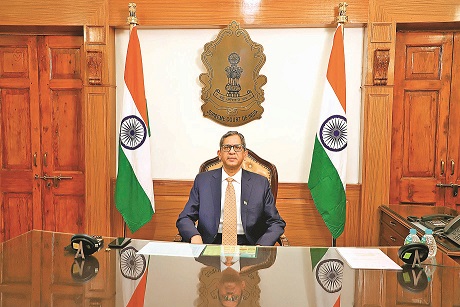 Tirupati, June 9 (IANS) Chief Justice of India N.V. Ramana on Thursday inaugurated two special courts constituted to deal with red sanders cases. The special courts have come up at the Tirupati Urban Development Authority (TUDA) complex in the temple town. The CJI inaugurated Judicial Magistrate of First Class Court and a District Court. These are the first special courts set up in the state to deal with red sanders smuggling cases. The courts will help in the speedy disposal of the cases. This region bordering Tamil Nadu is notorious for red sander smuggling. The rise in smuggling cases has led to large pendency of the cases and keeping this in view the state government took the initiative to set up special courts. The chief justice later addressed a conference of district judges at SV University. He also inaugurated birth centenary celebrations of former Andhra Pradesh Chief Minister N. T. Rama Rao. Justice Ramana paid rich tributes to NTR, as the former chief minister was popularly known. He said three letters NTR gives immense power to Telugu-speaking people. The CJI said NTR was a leader who knew people's pulse and he implemented several schemes for the welfare of people. He said NTR formed the party not for his own interests but to serve the people. NTR always believed that the political party should have an ideology, policies and discipline. The CJI said after his retirement he plans to write a book on NTR. --IANS