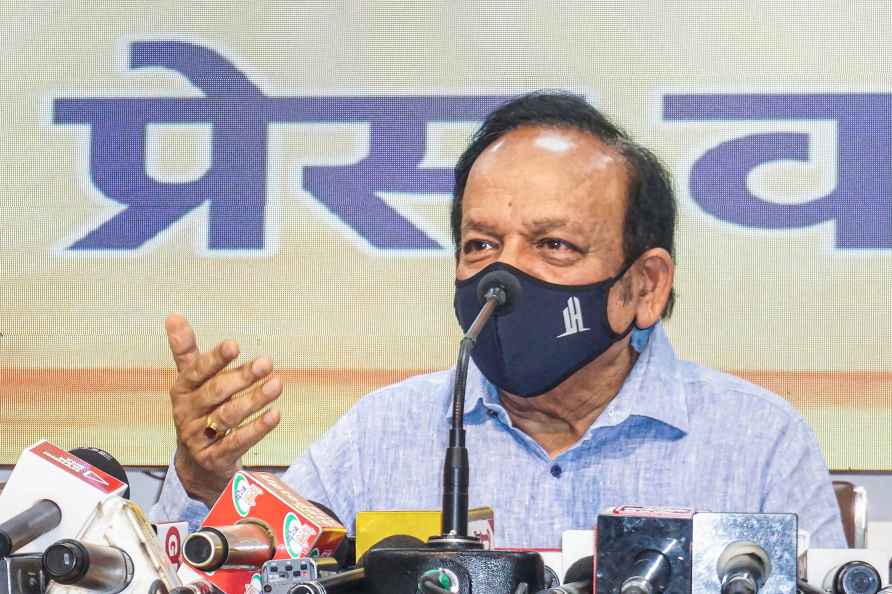 [New Delhi: Former union minister and BJP leader Harsh Vardhan addresses a press conference regarding the completion of 8 years of Prime Minister Narendra Modi's BJP-led government at the centre, at the party office in New Delhi, Tuesday, June 7, 2022. ( /PTI] New Delhi, June 7 : The BJP said that seeing an imminent defeat in Rajinder Nagar Assembly bypolls the Aam Aadmi Party (AAP) is indulging in "undemocratic practices". The BJP alleged that the AAP workers were removing posters and hoardings of party candidate Rajesh Bhatia. Talking about the allegation, Delhi BJP president Adesh Gupta told IANS that the AAP has realised that the people of Rajinder Nagar are going to reject its candidate and now they are doing all the unfair and undemocratic thing to stop our candidate Rajesh Bhatia. "AAP workers and goons are caught removing posters and hoardings of Bhatia. AAP and its leadership is doing hooliganism in frustration of losing the bypoll. But one thing is certain that, whatever they do and try, AAP's defeat from Rajinder Nagar is certain and written on the wall," Gupta said. BJP candidate Bhatia said, "Seeing the defeat, the AAP workers started damaging my posters at night. Chief Minister Arvind Kejriwal must realise that he can get my posters removed from the streets, but he will not succeed in removing me from the hearts of people of my constituency. My work is my identity. I am one of them, not an outsider like the AAP candidate." Bhatia on Monday filed his nomination paper from the constituency. Union Minister Meenakshi Lekhi, Gupta and BJP district in-charge Ashok Goel, Assembly in-charge for by-poll Ajay Mahawar and others accompanied Bhatia in filing the nomination papers. The bypoll was necessitated after AAP's Chadha resigned from the Delhi Assembly after he was elected to the Rajya Sabha from Punjab. Polling will be held on June 23 and counting of votes will take place on June 26. Earlier, the BJP termed that Rajinder Nagar Assembly bypoll as a contest between local and outsider. The AAP has fielded Durgesh Pathak, who contested the 2020 Assembly polls from Karawal Nagar Assembly constituency, while the BJP has fielded Bhatia, local resident and former councilor from one of the wards in the area. The BJP started by pointing out that Bhatia, a former BJP state unit general secretary, is a local and has been doing public service for years as a worker and elected representative during his five-year term as municipal councilor. The BJP said that the AAP has made Pathak, an imported leader its candidate from Rajinder Nagar who was earlier rejected by people of Karawal Nagar. /IANS