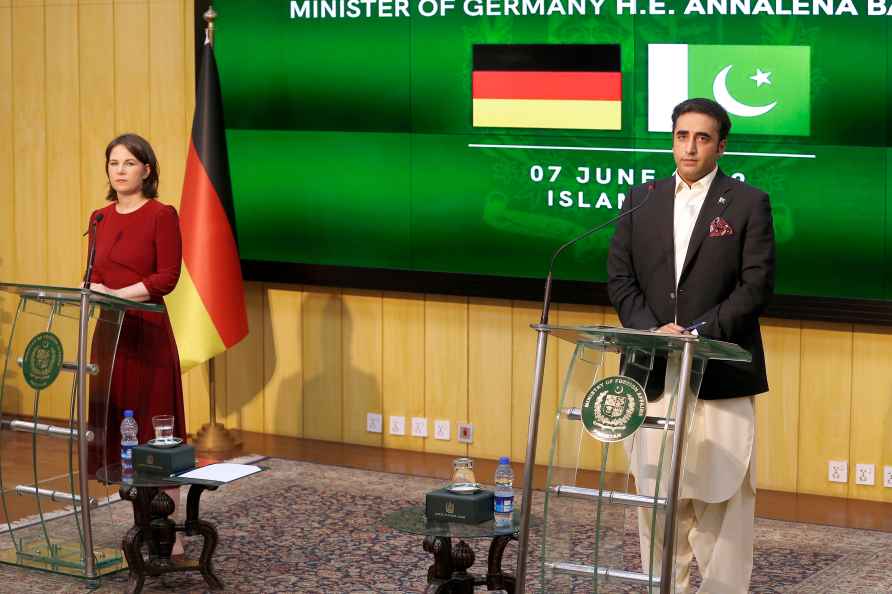 [German Foreign Minister Annalena Baerbock, left, and her Pakistani counterpart Bilawal Bhutto Zardari give a press conference after their meeting in Islamabad, Pakistan, Tuesday, June 7, 2022. Baerbock arrived in Islamabad on two-day visit to hold talks with Pakistani leadership to discuss bilateral matters, international issues and the current situation in Ukraine and Afghanistan. /PTI] Islamabad, June 7 : German Foreign Minister Annalena Baerbock will embark on a visit to Islamabad on Tuesday and Wednesday on the invitation of her counterpart in Islamabad Bilawal Bhutto-Zardari, the Foreign Ministry here said. During the two-day visit, the two Ministers will hold delegation-level talks on the entire range of bilateral matters and exchange views on regional and global issues, Xinhua news agency quoted the Minister as saying. Baerbock will also call on the Prime Minister Shahbaz Sharif, according to the statement. "Germany is a valued partner of Pakistan, both bilaterally and in the context of the European Union," the statement said, adding that the two countries have long-standing and cordial relations marked by mutual respect and close cooperation. The two sides attach special importance to strengthening bilateral cooperation in diverse fields, including trade and investment, energy, defence, and people-to-people contacts, said the ministry. The visit of the German Minister is part of regular high-level exchanges between the two countries and is expected to further boost the multi-faceted Pakistan-Germany relationship, according to the statement. /IANS

Lucknow, Aug 4 : The body of a clerk in the Public Works Department (PWD) here was found in the office under suspicious circumstances, late on Wednesday night. According to Sapna, the wife of th […]

Kanpur (Uttar Pradesh), Aug 4 : An inquiry has been ordered after an audio clip went viral on social media in which a police official is heard threatening a trader that he will be 'sent to Pakistan'. […]

'Sanatan Dharma' to be included in AMU curriculum

Aligarh, Aug 4 : After the Allahabad University decided to introduce courses in Hindu astrology and rituals, now the Aligarh Muslim University (AMU) will include 'Sanatan Dharma', along with other rel […]

Ottawa, Aug 4 : The Public Health Agency of Canada confirmed 890 cases of monkeypox in the country. The health agency said that of the confirmed cases as of Wednesday, 423 cases are from Ontario […]