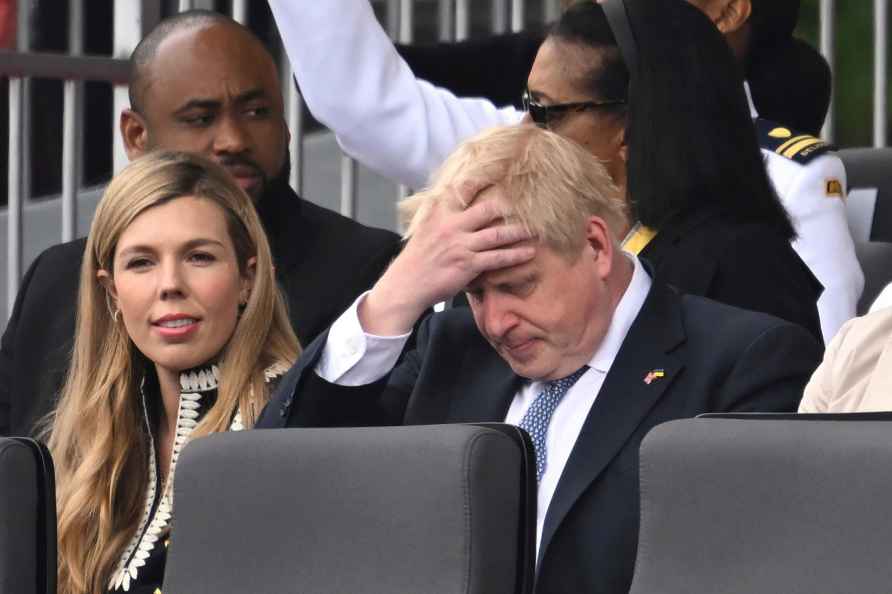 [FILE - Britain's Prime Minister Boris Johnson and his wife Carrie, are seated during the Platinum Jubilee Pageant, in London, Sunday June 5, 2022, on the last of four days of celebrations to mark the Platinum Jubilee. Britain's governing Conservatives will hold a no-confidence vote in Prime Minister Boris Johnson on Monday, June 6, 2022 that could oust him as Britain's leader. /PTI] London, June 6 : UK Prime Minister Boris Johnsons allies will switch their focus to winning a vote of no confidence, after conceding that they now have little chance of stopping one being triggered. Johnson will this week launch a health and housing policy fightback in a last-ditch attempt to win over his critics, the Guardian reported. He is widely expected to face a vote on his leadership as soon as this week, with some MPs predicting that the threshold of 54 letters asking for one has already been exceeded. In a remarkable shift in tone, UK Business Minister Paul Scully acknowledged on Sunday night that a vote of no confidence "might well happen", but insisted Johnson would "face it down". "Whatever happens, we've got to get back to governing, to tackle the things that people want us to do on a day-to-day basis." Hours earlier, Transport Secretary Grant Shapps had said he did not think there would be a vote this week. A No 10 source said Johnson would demonstrate over the coming days that he was "getting on with the job" and acknowledged it was also aimed at showing his determination not to be fatally weakened by a confidence vote, which the Prime Minister expects to win narrowly, the Guardian reported. /IANS