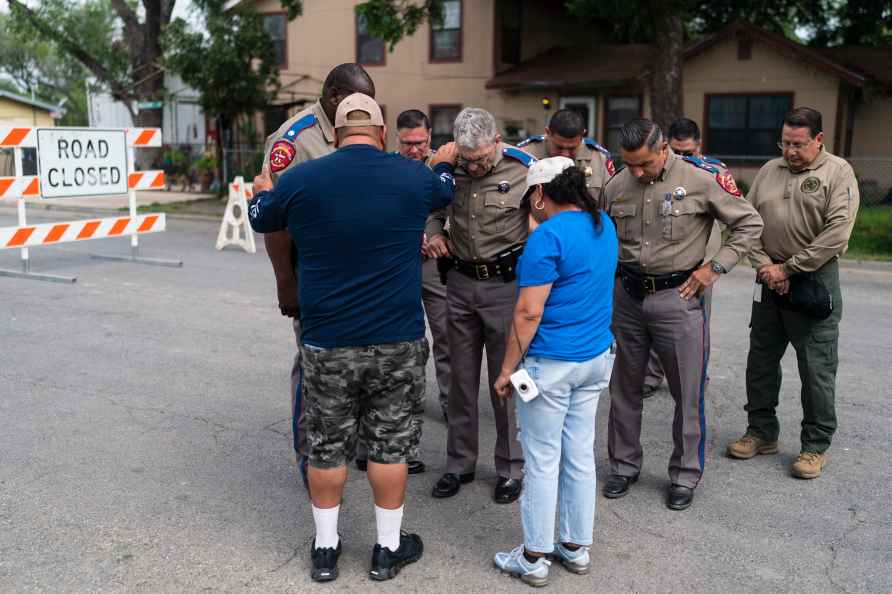 [Texas Department of Public Safety Director Steven McCraw, center, prays with Pastor Gabriel Davila and wife, Sylvia, outside Robb Elementary School in Uvalde, Texas Monday, May 30, 2022. On May 24, 2022, an 18-year-old entered the school and fatally shot several children and teachers. /PTI] Washington, May 30 : Residents of Washington, D.C. paid tribute to the 22 victims of last week's mass shooting at the Robb Elementary School in Uvalde, Texas. Twenty-one empty chairs for the 19 children and two teachers killed in the massacre on May 24 were laid out on a lawn outside a local church in the US capital on Sunday, reports Xinhua news agency. At the memorial, the names of the victims were also read out. President Joe Biden and First Lady Jill Biden travelled to Uvalde on Sunday to meet families of the victims and survivors of the massacre. They also visited a memorial constructed outside Robb Elementary School. Meanwhile, the US Department of Justice announced on Sunday that it "will conduct a Critical Incident Review of the law enforcement response" to the mass shooting. "The goal of the review is to provide an independent account of law enforcement actions and responses that day, and to identify lessons learned and best practices to help first responders prepare for and respond to active shooter events," spokesman Anthony Coley said in a statement. "As with prior Justice Department after-action reviews of mass shootings and other critical incidents, this assessment will be fair, transparent, and independent," Coley added. "The Justice Department will publish a report with its findings at the conclusion of its review." The Department's announcement came two days after a Texas Department of Public Safety Director Steven McCraw claimed that local police made the "wrong decision" by waiting nearly an hour to breach the school classroom where the 18-year-old gunman Salvador Ramos shot at children and teachers before he was neutralised by law enforcement. Nearly 20 officers stood outside the classroom during the attack and the on-scene commander believed at the time that the shooter had barricaded himself and that the children were no longer at risk, according to McCraw. "From the benefit of hindsight, where I'm sitting now, of course, it was not the right decision," he said of the commander's decision to wait for tactical teams to arrive to storm the classroom. "It was the wrong decision, period." More than 17,000 people have died in gun-related incidents across the US over the past five months of this year, including nearly 640 children and teenagers. /IANS