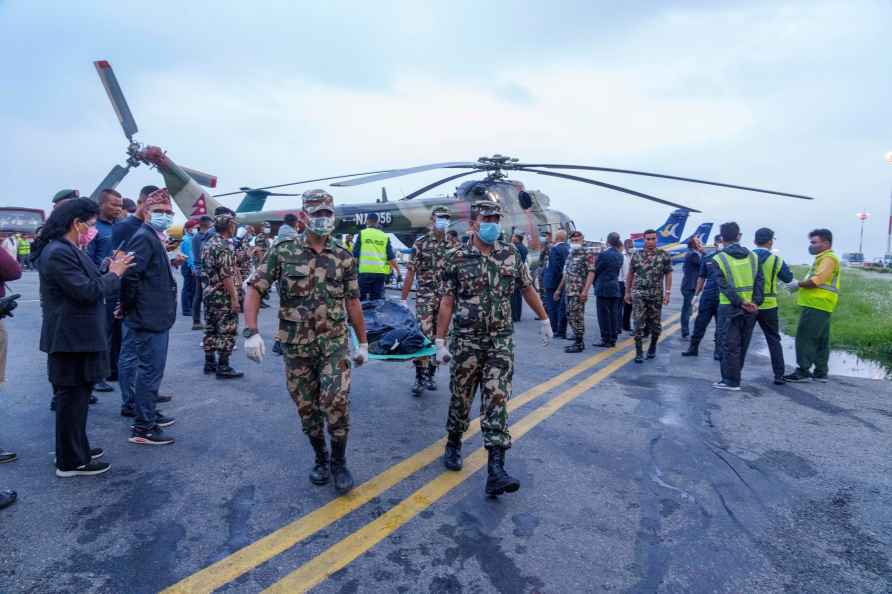 [Nepalese army men carry the dead body of a plane crash victim to an ambulance at an airport in Kathmandu, Nepal, Monday, May 30, 2022. Rescuers searching a mountainside in Nepal on Monday recovered the bodies of 21 of the 22 people who were on board a plane that crashed a day earlier, officials said. /PTI] Kathmandu, May 30 : All passengers including four Indian nationals who were traveling in the ill-fated Tara Air have been confirmed dead, according to the passenger list released by the airline on Monday. Tara Air's 9 NAET twin-engine aircraft carrying 19 passengers and three crew members, flying from Pokhara to Jomsom had lost contact on Sunday morning, minutes after it took off from Pokhara airport. "I am sad to hear that all passengers onboard in the Tara Air are dead," Nepal's Prime Minister Sher Bahadur Deuba tweeted on Monday afternoon as he offered condolences to the families of the deceased. The Indian nationals identified as Vaibhavi Banderkar, Ashok Kumar Tripathy, Dhanush Tripathy and Ritika Tripathy are believed to be from Pune. Likewise, seven members of a Nepalese family were also killed in the crash. As of Monday afternoon, 20 dead bodies have been retrieved from the crash site, according to Sudarshan Bartaula, spokesperson of Tara Air. "The search and rescue teams are scouring the area for the remaining two bodies," he said. "There are around 100 people at the crash site including officials of Nepal Army, Armed Police Force, Nepal Police, mountaineering rescue officials and locals searching for the remaining bodies." The bodies have been scattered over a 100-metre radius from the main impact point. The India Embassy in Kathmandu has already established contacts with family members of the departed indian nationals. Following the plane crash, Nepal's Ministry of Civil Aviation and Tourism formed a five-member probe committee on Monday to ascertain the reasons behind the mishap. Nepal's Home Ministry said that once the dead bodies are brought to Kathmandu, they will be handed over to the families. The missing plane was found 24 hours after it crashed in Mustang district. Tweeting the photo of the missing plane that ended in a fatal accident on Sunday morning, Nepal Army Spokesperson Brigadier General Narayan Silwal informed that the missing aircraft was found in Sanosware, Thasang-2, Mustang near Jomsom airport. As per the photo released by the army, the aircraft that was carrying 19 passengers and three crew members, wrecked into several pieces. After bad weather hampered the search and rescue operation on Sunday, the army called off the mission and resumed the operation on Monday morning. The search for Tara's plane began shortly after it lost contact on Sunday morning. But the plane could not be traced. It takes 20 minutes to reach Jomsom from Pokhara. But within 12 minutes of taking off, the aircraft lost contact. According to Tara Air, the missing aircraft last came in contact with Jomsom Tower at 10.07 a.m. on Sunday at Ghodepani before it lost contact, according to a statement issued by the country's civil aviation office. Soon after the aircraft went out of contact, the Nepal Army deployed its personnel in the Lete area for search. The plane was carrying 13 Nepalese, four Indians, and two Germans. /IANS