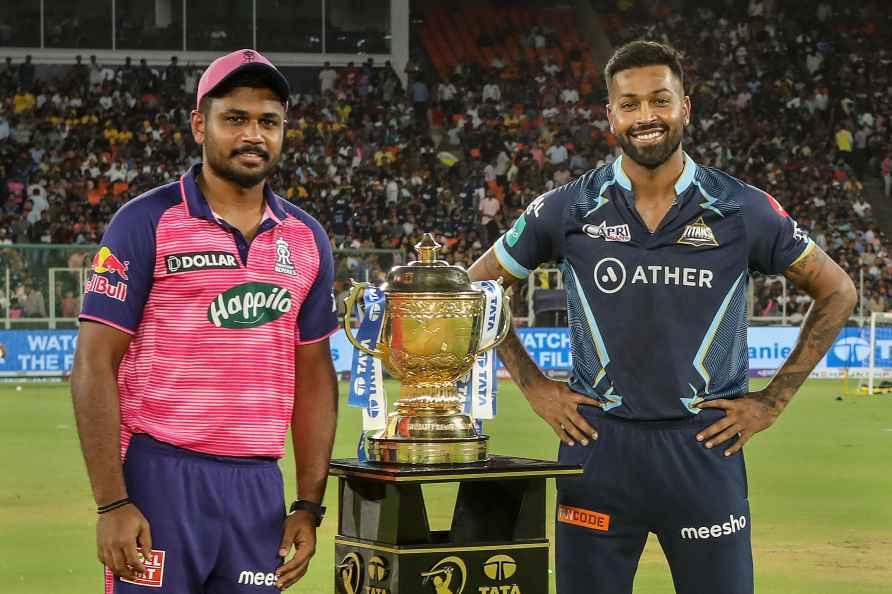 Ahmedabad, May 29 : A determined Gujarat Titans made their maiden IPL season an unforgettable one by clinching the 2022 title with a seven-wicket win over Rajasthan Royals in front of a roaring home crowd of 1,04,859 at the Narendra Modi Stadium on Sunday. By finishing off a chase of 131 with 11 balls remaining and defeating Rajasthan for the third time in IPL 2022, Gujarat have capped off a season where they exceeded everyone's pre-tournament expectations to become champions in their debut season of the competition. Chasing 131 wasn't going to be easy for Gujarat on a slow, dry pitch with variable bounce, where Hardik Pandya had taken a fantastic 3/17 in the first innings. Wriddhiman Saha was clean bowled by a quick inswinger from Prasidh Krishna while Matthew Wade flicked straight to mid-wicket off Trent Boult. After Gujarat could amass just 31/2 from power-play, Rajasthan's bowling continued to be incisive from both ends as Shubman Gill and Hardik Pandya struggled to break free despite some boundaries here and there. Gill, who was dropped on fourth ball of the innings, earned another reprieve in the eighth over when a hoick down the pitch wasn't caught by a diving extra cover. But the introduction of Ravichandran Ashwin brought Pandya the chance to find his groove, taking the off-spinner for a four with a thick outer edge past the keeper and followed it up with a six over wide long-on. The 63-run stand off 53 balls between Pandya and Gill ended when Yuzvendra Chahal took out the former with the one turning away and taking the outer edge, giving a catch to slip. It seemed like Pandya's dismissal would leave Gujarat in a spot of bother. David Miller, one of their key players in the season, began by driving Obed McCoy through extra cover for a boundary and then dispatched an overpitched ball from Ashwin over long-on to make the equation 22 runs off the last four overs. The left-hander took two boundaries off Krishna's final over, a pull swivelled over fine leg followed by a thick edge through third man. Gill finished off the innings in style with a swivelled six off McCoy over deep square leg to make Gujarat IPL 2022 champions. Brief Scores: Rajasthan Royals 130/9 in 20 overs (Jos Buttler 39, Yashasvi Jaiswal 22; Hardik Pandya 3/17, R Sai Kishore 2/20) lost to Gujarat Titans 133/3 in 18.1 overs (Shubman Gill 45 not out, Hardik Pandya 34; Trent Boult 1/14, Yuzvendra Chahal 1/20) by seven wickets /IANS

New Delhi, Dec 1 : A Border Security Force (BSF) jawan who accidentally crossed the International Border in Punjab's Abohar sector was apprehended and later released by the Pakistan Rangers. He crosse […]

Chandigarh, Dec 1 : To give further impetus to the growth of the state's textile sector and provide a comprehensive support framework for the industry to grow, the Haryana government on Thursday appro […]