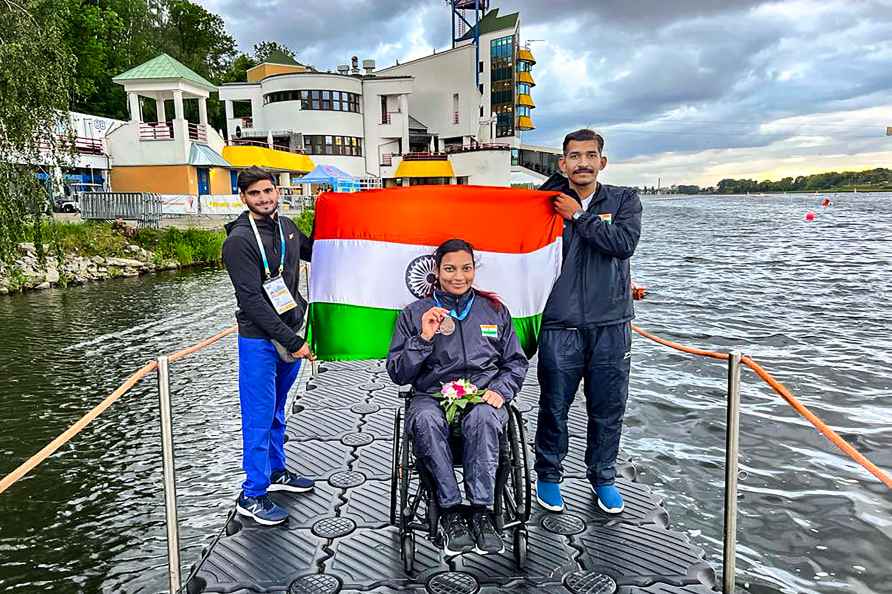 [**EDS: TWITTER IMAGE POSTED BY @Media_SAI ON SUNDAY, MAY 29, 2022** Poznan: Prachi Yadav becomes the 1st Indian Canoeist to win a World Cup Medal as she clinches the Bronze Medal in the VL2 Women's 200m at the 2022 ICF Paracanoe World Cup in Poznan. ( /PTI] Mumbai, May 29 : Paralympian Prachi Yadav made history for India by becoming the first canoeist from the country to win a World Cup medal when she bagged a bronze in the VL2 Women's 200m in the Paracanoe World Cup held in Poznan, Poland. Prachi, the para-canoeist from Gwalior in Madhya Pradesh who is the first Indian to qualify for and reach the final in the Paralympic Games in Tokyo last year, finished third in the VL2 Women's 200m in 1:04.71 to finish behind Tokyo 2020 silver medallist Susan Seipel of Australia and Brianna Hennessy of Canada, who bagged gold and silver respectively. Seipel won the VL2 women's 200m in 1:01.54 while Henessy finished in 1:01.58 in the final held on Saturday. The Paracanoe World Cup in Poznan, which started on May 26 and will end on Sunday, turned out to be a great outing for India. It was marked by the best performance by Manish Kaurav in KL3 Men 200m and Manjeet Singh in VL2 Men 200m by reaching the finals for the first time in the history of the sport in India. There was also a great effort by Jaideep in VL3 Men's 200m category as he reached the semifinal. Tokyo 2020 gold medallist and London 2012 wheelchair basketball gold medallist Edina Müller of Germany claimed the KL1 women's 200 metres gold at the International Canoe Federation (ICF) Paracanoe World Cup in Poznan. Müller, who took up canoeing in 2014, crossed the line in 53.87 sec. Two-time world champion Maryna Mazhula of Ukraine came in second in 54.08 before Brianna Hennessy of Canada bagged bronze in 54.88. It was Germany who triumphed in the women's KL2 200m thanks to Anja Adler who raced to finish in 52.17. Tokyo 2020 silver medallist Susan Seipel of Australia placed second in 53.27 before Natalia Lahutenko finished third in 54.95. /IANS

Statewide protest in Gujarat against 18% GST on 'garba'
[Surat: Aam Aadmi Party (AAP) workers stage a protest against the state government over imposing of GST on commercial garba's entry passes, in Surat,

Prayagraj: A Cheetah helicopter of the Indian Army makes a precautionary landing after the pilot noticed the blinking of a warning light, at Karchhana village near Prayagraj, Wednesday, Aug. 3, 2022. […]