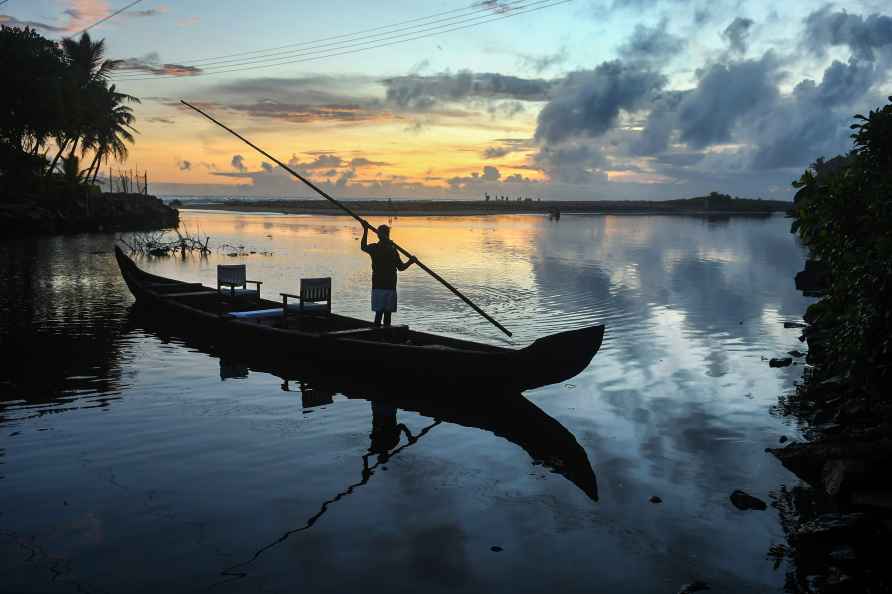 [Thiruvananthapuram: A man rows a traditonal boat at a coastal village, in Thiruvananthapuram, Sunday, May 29, 2022. The Southwest Monsoon has set in over Kerala on Sunday, three days ahead of its usual date. ( /PTI] New Delhi, May 29 : The much awaited Southwest Monsoon reached Kerala on Sunday, three days ahead of its normal date of onset of June 1, India Meteorological Department (IMD) said. For the agrarian economy, the news of onset of SW monsoon - termed as the real finance minister of India - over Kerala is the most awaited news at this time of the year. Having a normal monsoon or not has a major impact on the domestic economy vis-a-vis crop production. "Southwest Monsoon has advanced into remaining parts of south Arabian Sea, Lakshadweep area, most parts of Kerala, some parts of south Tamil Nadu, some parts of Gulf of Mannar and some more parts of southwest Bay of Bengal on May 29. Thus, Southwest Monsoon has set in over Kerala today, against the normal date of June 1, i.e. three days ahead of its normal date," IMD statement said. The conditions that are satisfied for declaration of onset of Southwest Monsoon over Kerala include wind speed, direction, outgoing long wave radiation (OLR) and rainfall at designated stations. "The depth of westerly winds extends up to 4.5 km above mean sea level. The strength of the westerly winds has increased over southeast Arabian Sea and is about 15-20 kts (25-35 kmph)," IMD said. "Cloudiness over southeast Arabian Sea and adjoining areas of Kerala have increased and the average outgoing long wave radiation (OLR) is about 189.7 W/M2 (thus, satisfying the condition of OLR is less than 200 W/M2)," it added. One condition that has not been fully satisfied is that there has been widespread rainfall activity over Kerala during past 24 hours and out of 14 rainfall monitoring stations for declaring onset of monsoon over Kerala, only 10 have received rainfall of 2.5 mm or more. However, conditions are favourable for further advance of southwest monsoon into some parts of central Arabian Sea, reaming parts of Kerala, some more parts of Tamil Nadu, some parts of Karnataka, and some more parts of south and Central Bay of Bengal, some parts of northeast Bay of Bengal and northeastern states during next 3-4 days, the Met forecast said. The rainfall/thunderstorm forecast & warning said that under the influence of monsoonal westerly winds from Arabian Sea over the south peninsular India in lower & middle tropospheric levels and a cyclonic circulation over Kerala & neighbourhood in mid tropospheric levels, widespread light/moderate rainfall with thunderstorm/lightning is very likely over Kerala & Mahe and Lakshadweep and isolated to scattered rainfall over Andhra Pradesh, Telangana, Karnataka and Tamil Nadu, Puducherry & Karaikal during next five days. Isolated heavy rainfall is also likely over Kerala & Mahe till June 2. This year, IMD's first prediction for monsoon onset was for May 27 with the model error of plus/minus four days. But after that, there was a lot of flip flop by the IMD over actual date. Prior to it, on May 19, the IMD had said, the SW monsoon onset over Kerala was possible by May 25. Earlier on May 26, the IMD had said monsoon onset can happen anytime in the forecasting week (meaning till June 1) and the conditions are being monitored real time. It did finally happen before June 1. /IANS