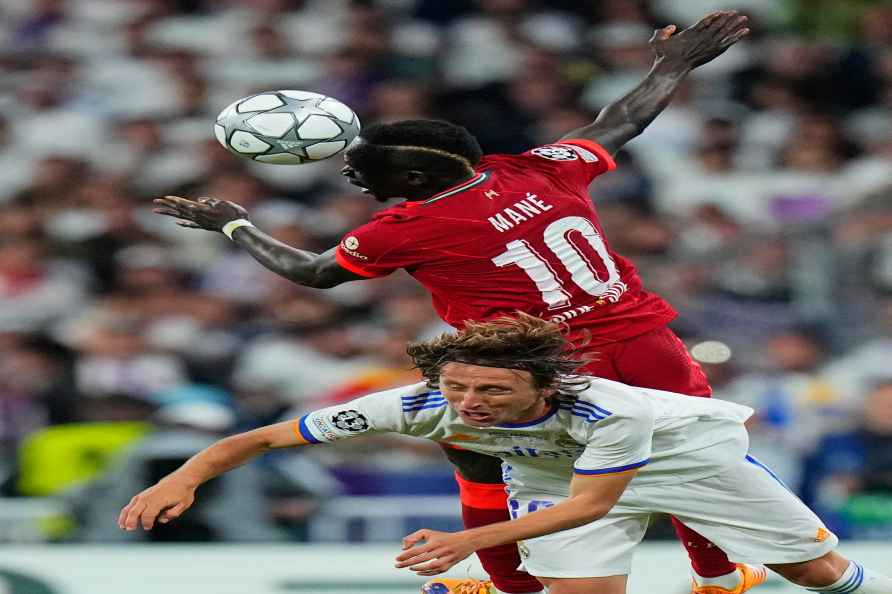 [Liverpool's Sadio Mane, top, is challenged by Real Madrid's Luka Modric during the Champions League final soccer match between Liverpool and Real Madrid at the Stade de France in Saint Denis near Paris, Saturday, May 28, 2022. /PTI] Paris, May 29 : Vinicius Junior scored a winner in the second half to fire Real Madrid to a record-extending 14th UEFA Champions League title as the Spanish giants beat Liverpool 1-0 in a delayed final at Stade de France early on Sunday (IST). The Brazilian winger capitalised on Federico Valverde's cross in the 59th minute to tap the ball into an empty net, securing the fifth Champions League trophy for Los Blancos in nine years. Madrid last won the prestigious continental competition in 2018, when they also beat the Reds in the final. This time, Jurgen Klopp's side created more chances, nine strikes on target from 23 attempts while Madrid only had one from nine. But Belgian goalkeeper Thibaut Courtois, who was named the Player of the Match, made several stunning saves to deny Liverpool's attack. "Today nobody was going to get in my way," Courtois said. "I was going to win a Champions League no matter what." Madrid's Carlo Ancelotti became the first coach to win the Champions League for four times, while the Italian is also the only one to have taken a team to five finals. "I cannot believe I've won four Champions Leagues! It was a difficult game, we suffered in the first half but in the end with all the games we played I think we deserved to win this competition," said the former AC Milan coach, who led the Italian side to the European premier glory twice in 2003 and 2007, before another victory with Real Madrid in his first spell at the La Liga club in 2014, Xinhua reports. "The gameplan worked well, and Courtois helped cap a fantastic season for himself personally. It's a fantastic club and squad with a lot of quality and strong mental character," he added. Despite having not scored in the final, Madrid's lethal forward Karim Benzema finished the season as the top scorer of the tournament with 15 goals, including 10 in the knockout stage. In the final, the French striker did have the ball in the net before halftime only for VAR to deny it for offside. "We're so happy and proud of this team. We've done the double and deservedly so. It was a tough game but it always is in the Champions League, and more so in a final. It means so much to me to win another Champions League here in my home country," said Benzema, whom is widely regarded as the frontrunner in the race for this year's Ballon d'Or. The final, which was initially scheduled at 9:00 pm local time, was delayed for 36 minutes due to "security issue". French police said in a statement that a group of supporters without tickets had attempted to "penetrate the stadium", causing chaos outside the Stade de France. UEFA blamed "fake tickets which did not work in the turnstiles" for the events that saw supporters held up outside the stadium. "As numbers outside the stadium continued to build up after kick off, the police dispersed them with tear gas and forced them away from the stadium," UEFA said, adding that it was "sympathetic to those affected by these events and will further review these matters urgently together with the French police and authorities, and with the French Football Federation." /IANS