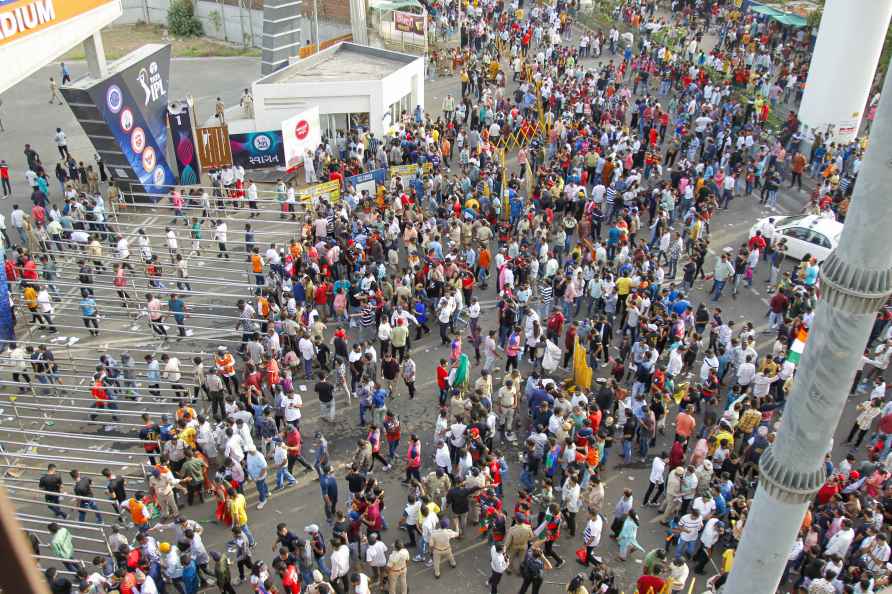 [Ahmedabad: Cricket fans gather outside the Narendra Modi Stadium to watch the IPL 2022 quarter-final match between Rajasthan Royals and Royal Challengers Bangalore, in Ahmedabad, Friday, May 27, 2022. ( /PTI] Ahmedabad, May 27 : Royal Challengers Bangalore skipper Faf du Plessis heaped praise on top-order batter Rajat Patidar for his unbeaten 112 off just 54 balls, which carried the side to a 14-run win in the eliminator of IPL 2022. Patidar's knock, laced with 12 fours and seven sixes meant that Bangalore will now face Rajasthan Royals in Qualifier 2 at the Narendra Modi Stadium on Friday. The winner of Friday's match will then face Gujarat Titans in the title clash on Sunday. "I think Rajat's innings was a remarkable one. Just one of those innings that will last a very long time. It takes years and years to get one of the innings in the knockouts of the IPL, which is always special. For someone to play an innings like that in his career, we were all just in awe watching him doing his thing," said du Plessis in a Game Day preview video posted by the franchise. "Obviously, a little bit of luck but that's how it works. When you have a great innings, everything falls in your way. He was crucial for us to get that 200 on the board, which we needed on a good pitch and a small ground where the outfield is pretty quick. He put us in a position where we could put pressure on the opposing team," added du Plessis. The journey of Bangalore in reaching the playoffs, thanks to a Mumbai Indians favour, but outside the top two, has been a very gruelling one, something which du Plessis acknowledged. "When you don't finish in the top two, that becomes very challenging as your run into a final is a tough one. It's hard on the body and mind because the IPL, especially this year has been quite stretched out. So, there has been a good time for recovery. You could work on a few things in the practices." "But the nature of finishing in three/four is play, travel, play, travel. We have had two months of cricket so; you are a little bit more stretched out towards the end and same thing mentally. It's emotionally straining, last night, there was not a lot of sleep for most of us because we got back quite late because the game started late." Talking about the celebrations in the camp when Mumbai won by five wickets against Delhi Capitals and sealed their entry into the playoffs, du Plessis recalled, "It (Saturday) was a great occasion the other night when we were celebrating together and seeing our qualification as a team." "There were extremely high emotions, that's because we did not have anything in our control, so we didn't need to be calm to get across the line. After that game, it was important for us to celebrate us getting through knockouts stages, which we worked really hard for and was the mission: to get into the ending stages of the IPL." He signed off by saying that being neutral in nature meant Bangalore didn't make any hype ahead of the knockout matches. "For me, it was important before these games, we brought those emotions down a little bit. It has been a season where we have treated wins and losses similarly; gone neither too high nor too low." "It was just having that really calm dressing room where guys are not hyping up a must-win game. It's about trusting each other in the room, skills and if we bring out the best of that, then we will be a very dangerous team." /IANS

Russia to begin partial military mobilisation: Putin
[Moscow: In this image made from a video released by the Russian Presidential Press Service, Russian President Vladimir Putin addresses the nation in

New Delhi, Sep 20 : Congress General Secretary Organisation K.C. Venugopal has been asked to come to Delhi to meet Sonia Gandhi ahead of the party's president poll. Venugopal was in Bharat Jodo […]