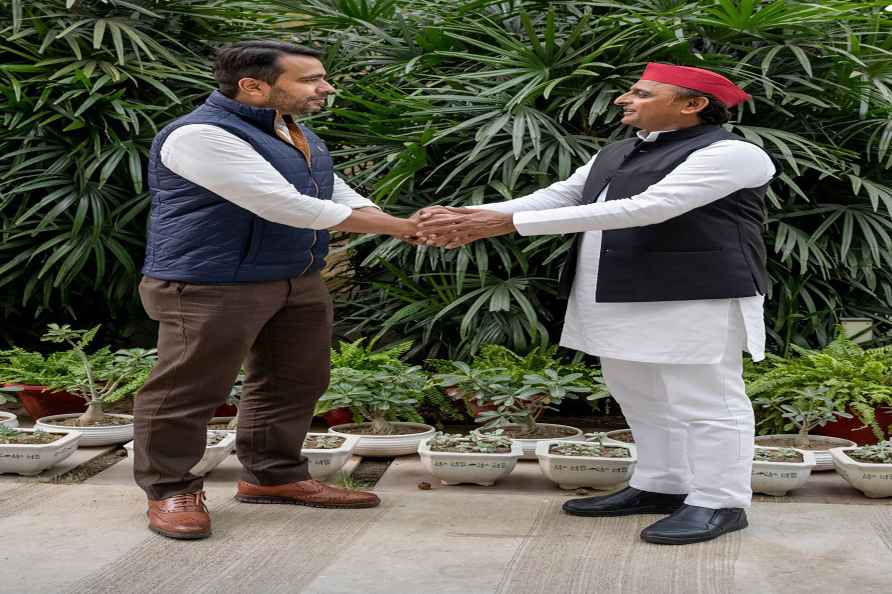 [**EDS: FILE PHOTO** Lucknow: In this file photo dated Nov. 23, 2021, Rashtriya Lok Dal President Jayant Singh Chaudhary with Samajwadi Party President Akhilesh Yadav during a meeting. RLD's Jayant Chaudhary will be the joint candidate of the SP and RLD for the Rajya Sabha polls from Uttar Pradesh, the Samajwadi Party (SP) announced on Thursday, May 26, 2022. ( /PTI] Lucknow, May 26 : Jayant Chaudhary, president of the Rashtriya Lok Dal will be the third candidate supported by the Samajwadi Party for the Rajya Sabha biennial elections. The party has already announced its support for Kapil Sibal, who is contesting as an independent candidate. Another SP nominee is Javed Ali. By announcing support to Jayant Chaudhary, the Samajwadi Party has made the first move to cement the SP-RLD alliance for the Lok Sabha elections. Jayant is expected to file his nomination papers on Friday. The RLD has eight MLAs in the Uttar Pradesh Assembly and a candidate needs 37 votes to win the seat. Meanwhile, Samajwadi Party sources said that the party was likely to field Dimple Yadav in the upcoming by-election on the Azamgarh Lok Sabha seat. The seat had fallen vacant after Akhilesh Yadav resigned from the Lok Sabha in March and opted to remain active in state politics. /IANS

No burial grounds in 1,428 villages of K'taka, HC warns of contempt proceedings

Bengaluru, June 25 : The Revenue Department under the Karnataka government has given orders to officers to find land for burial grounds in 1,428 villages in the state to escape the wrath of the High C […]

New Delhi, June 25 : The government has issued notification for recruitment in the Indian Army, Indian Air Force and Indian Navy under the much debated and opposed Agnipath scheme. The country w […]

Places of Worship Act validates 'places of worship' made by 'barbaric invaders': PIL

New Delhi, June 25 : A Public Interest Litigation (PIL) has been moved in the Supreme Court challenging the validity of the Places of Worship Act, 1991, stating it seeks to validate 'places of worship […]

Kapil only said 'don't give up easily', and we did our best: Srikkanth

Chennai, June 25 : "Don't give up easily" were the words which spurred the India cricket team to win its maiden World Cup in 1983, and give it the belief to defend a miniscule total of 183 in 60 overs […]