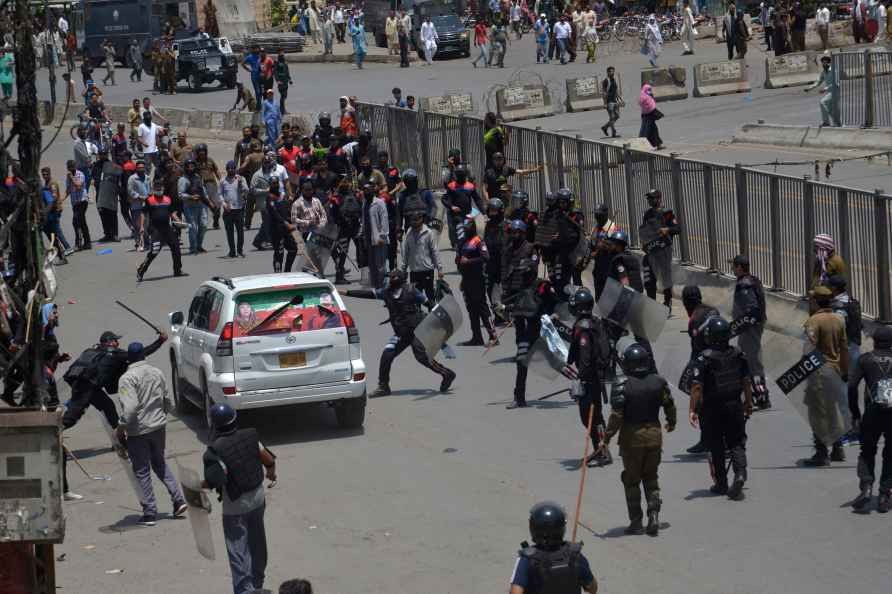 Rawalpindi/Lahore, May 25 : Pakistan Tehreek-i-Insaf workers and supporters are attempting to make their way towards Islamabad as they pushed aside containers and braved tear gas shelling after answering chairman Imran Khan's call for a long march onto Islamabad, Express Tribune reported. Imran arrived at Wali interchange in Khyber Pakhtunkhwa and later left for Islamabad via helicopter. Other party leaders departed for the federal capital from their respective areas. Speaking to charged party supporters in Swabi, he told his supporters that they will go to Islamabad's D-Chowk and "no one can stop us". Police in Lahore and workers of PTI clashed as the latter managed to push their way through the containers deployed at Batti Chowk by the government to stop the protesters from reaching Islamabad. Law enforcers resorted to tear gas after PTI supporters tried to remove the containers placed on the routes exiting Lahore. PTI leaders Yasmin Rashid, Hammad Azhar, and Shafqat Mehmood were leading the workers. The party supporters, resultantly, hurled stones at the police. At least 12 workers of the PTI were taken into custody by the police after the clashes. Former Punjab health minister Yasmin Rashid was also stopped briefly by local law enforcement, with the party claiming that the police tried to "snatch her car keys". A video of the incident shared on social media showed a purported PTI supporter resisting the arrest of the former minister, Express Tribune reported. /IANS

San Francisco/New Delhi, June 25 : As Elon Musk announced to cut 10 per cent of Tesla workforce, those who were fired took to social media and professional networking platforms to register their pligh […]

Leeds, June 25 : An advertisement starring late Australian cricketer Shane Warne, which continues to be used during the three-Test series between England and New Zealand, is causing dismay to several […]