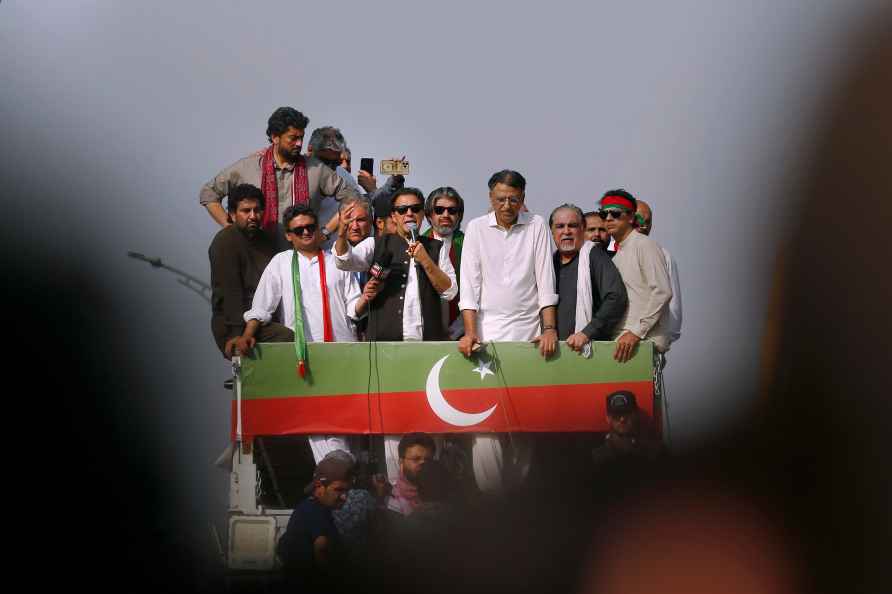 [Supporters of Pakistan?Äôs defiant former Prime Minister Imran Khan, center, addresses during an anti-government rally in Islamabad, Pakistan, Thursday, May 26, 2022. Defiant former Prime Minister Khan early Thursday warned Pakistan's government to set new elections in the next six days or he will again march on the capital along with 3 million people. /PTI] Islamabad, May 26 : Tensions in Pakistan's Punjab rose after police made use of tear gas and arrested several activists participating in the PTI's Azadi March in cities across the province as the activists attempted to remove shipping containers blocking routes to Islamabad, local media reported. Senior journalist Hamir Mir, on his Twitter account, claimed to have received a message from PTI leader Dr Shireen Mazari in which she claimed that the tear gas fired on women and children by the police was "expired". "Use of expired tear gas is not only violation of court orders but it's a terrorism against Pakistani citizens by Rana Sanaullah," he quoted Mazari as saying. Mazari retweeted Mir's tweet in an apparent confirmation of her claim, Dawn reported. Former Pakistan Prime Minister and Pakistan Tehreek-e-Insaf (PTI) Chairman Imran Khan, along with other party workers, on Wednesday reached Islamabad after PTI workers and supporters made their way towards the federal capital, pushing aside containers and braved tear gas shelling, Express Tribune reported. A large number of party workers and supporters were present at Islamabad toll plaza to welcome their leader. PTI leader Faisal Javed Khan, taking to Twitter, said that Imran Khan's caravan had entered the federal capital. "This caravan has not entered Islamabad but into a naya (new) Pakistan," he wrote, adding that they will earn "real independence" now. "The workers present at D-Chowk wait for meÂ? I am bringing a sea of people there," Khan announced atop his container, Express Tribune reported. Khan earlier in the evening said that his long march had entered Punjab and heading towards Islamabad. "No amount of state oppression and fascism by this imported govt can stop or deter our march," the former premier wrote on his official Twitter handle. The PTI chief in a fresh statement to his supporters this evening asked them to take to the streets following the top court's verdict regarding the venue of the political gathering. "I urge the entire nation to take to the streets with their families after the decision of the Supreme Court," Imran said in a video statement released from an undisclosed location. The former premier added that he was on his way to the famous D-Chowk and asked his supporters to come out of their homes to convey a message that they won't accept anyone's subservience. /IANS

Taliban appeals for unfreezing of Afghan reserves after devastating quake
[A participant wears a luminous cape at a memorial for the victims of the attack in Oslo, Norway, at the Brandenburg Gate in Berlin, Saturday, June 25

Mumbai, June 25 : Bollywood actress Sara Ali Khan was seen pulling superstar Salman Khan's leg by calling him "uncle" in a promo of IIFA Awards 2022, which will be aired on Saturday night. In a […]

Indians defeated Emergency by democratic means to restore democracy, difficult to find another such example in world: PM in Mann Ki Baat.

Indians defeated Emergency by democratic means to restore democracy, difficult to find another such example in world: PM in Mann Ki Baat. […]

Split car sequence in 'Paati Sollai Thattathe': Here's how the team did it

Chennai, June 25 : Aruna Guhan, one of the producers and Creative Directors of AVM Productions, one of the oldest and most reputed Tamil production houses, has now disclosed that it was her dad, produ […]

**EDS: TO GO WITH STORY, FILE PHOTO** Bengaluru: In this Sunday, July 30, 2017 file photo, Gujarat Congress MLAs show their unity at a press conference at a resort on the outskirts of Bengaluru. ( /PT […]