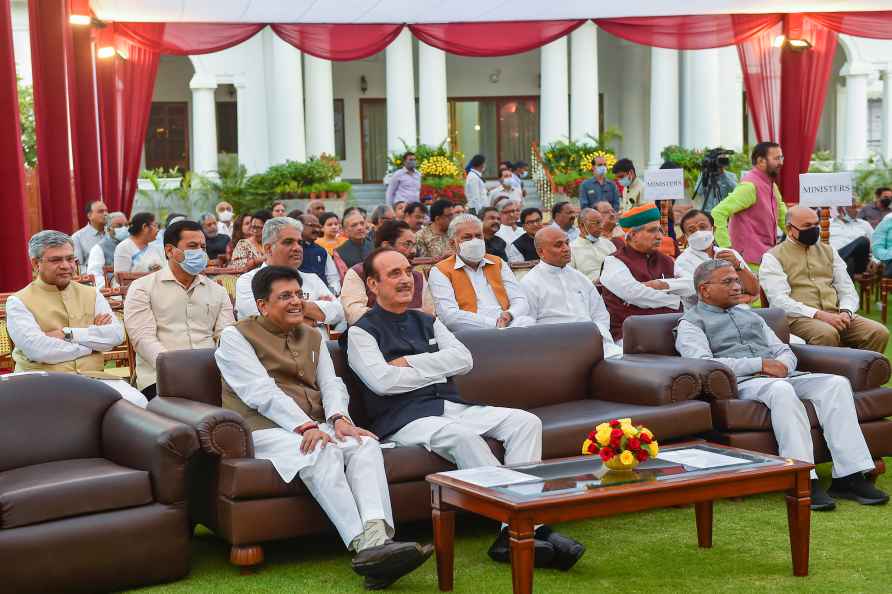 New Delhi, May 25 : Amid uncertainty over his Rajya Sabha nomination, union minister and senior JD-U leader R.C.P Singh on Wednesday denied having differences with Bihar chief minister Nitish Kumar. Union Steal Minister Singh, meanwhile, removed JD-U names from his twitter bio. Singh also put Prime Minister Narendra Modi picture with a message of 'Azadi Ka Amrit Mahotsav' in twitter profile. Talking to media, Singh said that there is no problem between him and the chief minister and this evening he will be going to Patna. "There is no difference with minister Kumar on any issue. The Rajya Sabha nomination is from May 24 to 31 and today there is a union cabinet meeting. Today evening, I am going to Patna," he said. When asked that he took oath as union minister without the consent Bihar chief minister Kumar, Singh called it a rumour and said he took the oath with the chief minister's consent only. Speculation is rife in political circle that relations between Kumar and Singh has soured after he was sworn in as the lone minister from JD-U in last year union cabinet reshuffle. There is complete uncertainty over Singh renomination to Rajya Sabha. Singh's tenure will end next month. /IANS

Fatehpur: Farmers aboard their tractors participate in a 'Tiranga Yatra' on the eve of Independence Day, in Fatehpur, Sunday, Aug. 14, 2022. ( /PTI […]

Chennai, Aug 13 : Several government hospitals in Tamil Nadu are under the grip of an acute shortage of medicines affecting the services. The government medical college hospitals are now functio […]

Free entry in monuments till Aug. 15

Jaipur: People visit the historical Jantar Mantar after the Rajasthan government made entry into all monuments and museums free from Aug. 13 to 15 as part of 'Azadi Ka Amrit Mahotsav' celebrations, in […]