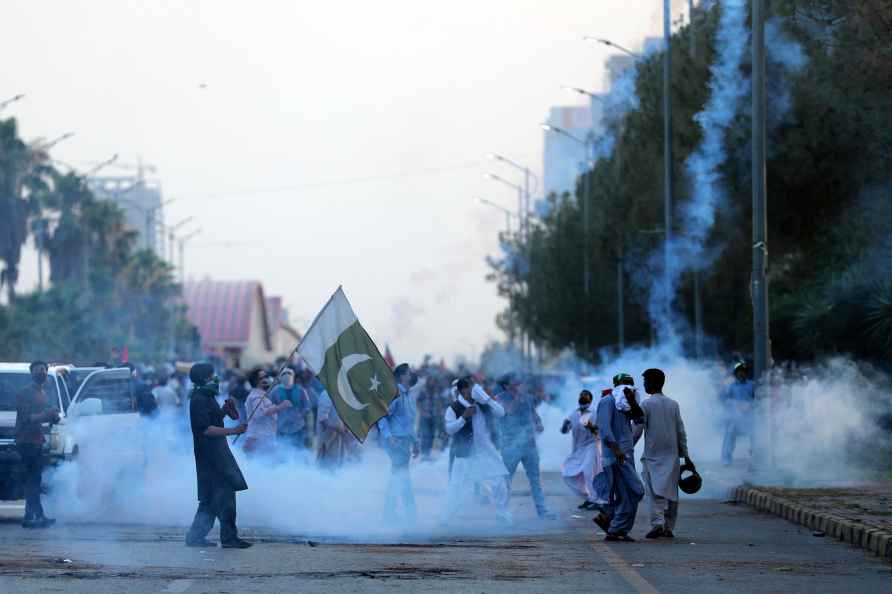 [Police fire tear gas to disperse supporters of Pakistan's key opposition party, in Islamabad, Pakistan, Wednesday, May 25, 2022. Pakistani authorities blocked off all major roads into the capital Islamabad on Wednesday, after a defiant former Prime Minister Imran Khan said he would march with demonstrators to the city center for a rally he hopes will bring down the government and force early elections. /PTI] By Hamza Ameer Islamabad, May 25 : Imran Khan's call for long march towards Islamabad has started with Pakistan's major cities and the capital Islamabad turned into a bunker surrounded by containers, blockades, trucks, barbed wires and security deployment, a step Shehbaz Sharif government took after it refused to allow PTI long march and anti-government sit-in protest to be carried out in the capital. The government's decision was rejected by Imran Khan who announced that he would take the long march out from Peshawar and called on all of his supporters, especially the youth to come out in big numbers from all parts of the country and march towards the capital. Since Wednesday morning, chaotic scenes have been witnessed in various parts of the country, especially Punjab province where violent confrontations between the PTI protesters and security forces with the police officials resorting to the use of tear gas and baton charge to disperse the protesters. As per reports, hundreds of PTI protesters have been taken into custody, while violent confrontations are being reported from the different parts of the Punjab province. Special security measures have been taken as the federal government decided to call in Pakistan Army to secure the Red zone in the capital, which houses government offices and the diplomatic enclave. Moreover, the capital Islamabad has been secured from all entry points that connect with other cities and routes with containers and deployment of security forces. Imran Khan has reached Wali interchange from Peshawar and has started marching towards the capital from the Peshawar-Islamabad motorway in a specially built container aka caravan. Protesters continue to have violent confrontations with the security forces as they push their way through the containers and blockades to reach Islamabad. On the other hand, Imran Khan has also changed the venue of the sit-in protest late last night from Srinagar Highway to D-Chowk, the very place where he staged a 126-day protest against the then government of Nawaz Sharif in 2014. Weapons recovered Pakistan Muslim League - Nawaz (PML-N) government has alleged that the Punjab Police had recovered weapons from the vehicles of PTI in Lahore led by PTI's Zubair Niazi and Bajash Niazi. PML-N leader Maryam Nawaz Sharif shared pictures of the recovered weapons stating, "This is the ugly face of the so-called long march. These are the intentions." The government maintains that Imran khan has not given any assurance to the government or to the courts of not resorting to violence during his long march nor has he assured that he would not lead the protest forwards towards the capital's red zone. Reminding of what happened in 2014, Interior Minister Rana Sanaullah said: "The last time Imran Khan brought his long march to Islamabad, he had given a written guarantee that he would stage his march at Bara Kahu in Islamabad. But later, violated it and called on his supporters to march forward towards the red zone," he said. "We all know well how PTV headquarters was attacked. How parliament was attacked. And how Imran Khan was declaring victory on these attacks on state institutions. We cannot trust him this time, that also when he refuses to give any assurance or guarantee. This menace of Imran Khan cannot be allowed to try to do the same again," he added. Imran Khan on the other hand, has said he will not stop and will march towards Islamabad, vowing to stage a protest right outside Parliament until the government is not dissolved and early elections are not called. The situation on ground in Pakistan remains grim as more violence and confrontations are expected between the security forces and PTI's supporters with every passing hour. /IANS

Maha crisis: Desperate Shiv Sena and rebels prepare for a long-haul
[Guwahati: Security personnel outside the hotel where Shiv Sena leader Eknath Shinde along with other rebel Shiv Sena MLAs is staying, in Guwahati, Sa

New Delhi, June 25 : India on Saturday witnessed a decline in Covid cases with 15,940 infections reported in the past 24 hours, against previous day's 17,336, as per the Union Health Ministry data. […]

Islamabad, June 25 : An eight-month-old infant in Pakistan's North Waziristan district was found to be parlaysed by the poliovirus, increasing the number of cases detected this year to 11, as compared […]