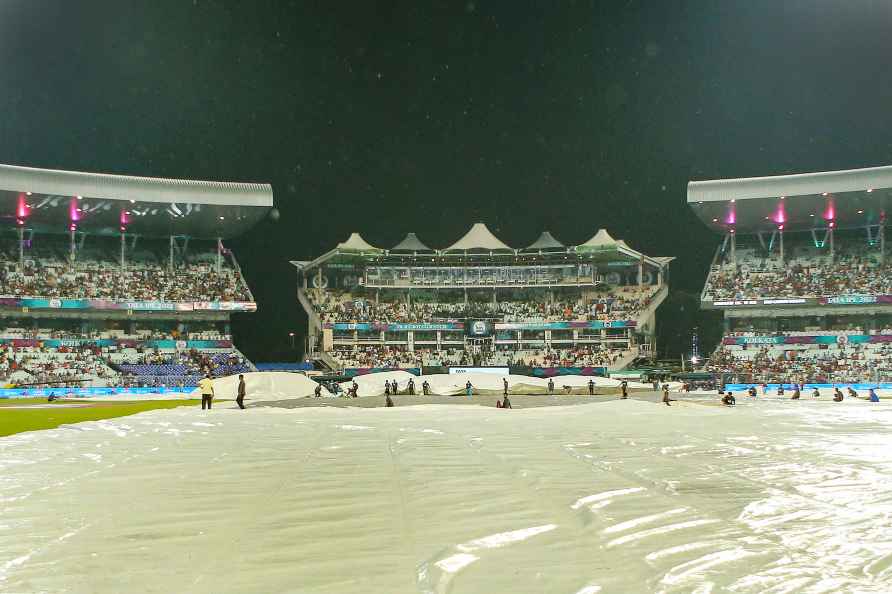 [Kolkata: Rain covers come on as the toss is delayed during the Eliminator match of the Indian Premier League 2022, between the Lucknow Super Giants and the Royal Challengers Bangalore, at Eden Gardens Stadium in Kolkata, Wednesday, May 25, 2022. (Sportzpics for IPL/ /PTI] Kolkata, May 25 : The toss in the IPL 2022 Eliminator match between Lucknow Super Giants and Royal Challengers Bangalore at the Eden Gardens on Wednesday has been delayed due to slight drizzle. Just as captains KL Rahul and Faf du Plessis were all set to go for the toss, strong winds along with drizzle took over, forcing them as well as the broadcast team to go off the field as groundsmen covered the pitch and entire playing field quickly. There is no reserve day for the Eliminator and as per the playing conditions for the Playoffs, Lucknow will go through to the Qualifier 2 against Rajasthan Royals in Ahmedabad on Friday as they finished higher on the table, at third place, compared to Bangalore's fourth position. The playing conditions also say that playoffs matches can start as late as 9:40pm without any deduction in the overs. A five overs per side match can start latest by 11:56pm. But if time isn't there for the five overs per side affair, there will be a super over starting no later than 12:50am. In the run-up to the playoffs, the inclement weather in Kolkata had been a worry for the matches to happen as per the schedule. Coming to the match, the Eliminator is supposed to happen on the pitch which hosted Qualifier 1 between Gujarat Titans and Rajasthan Royals on Tuesday. /IANS