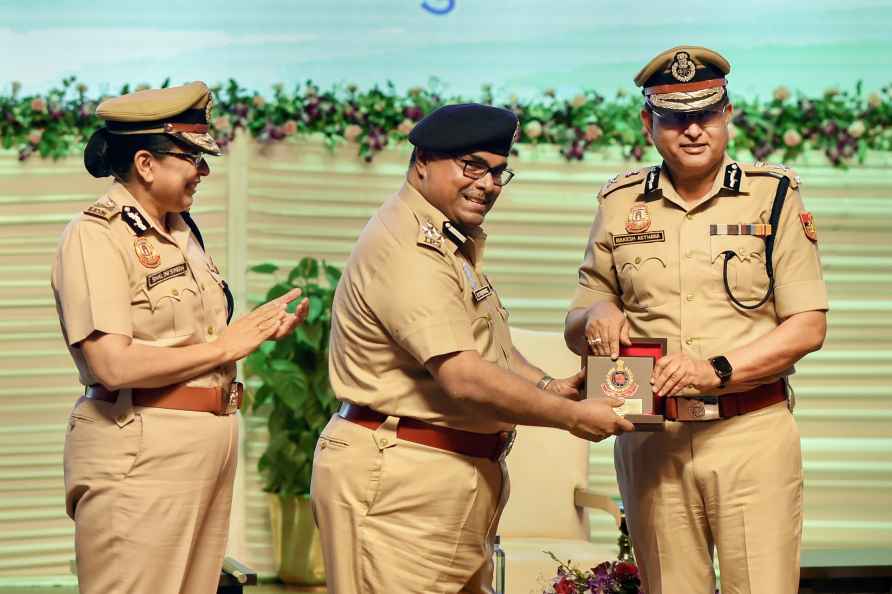 [New Delhi: Delhi Police Commissioner Rakesh Asthana felicitates Additional Commissioner of Police (Welfare) A. V. Deshpande, in the presence of Special Commissioner of Police (Welfare) Shalini Singh during the inauguration ceremony of the Welfare website and DigiLocker, in New Delhi, Wednesday, May 25, 2022. ( /PTI] New Delhi, May 25 : In a joint operation, the Special Cell of Delhi Police and Uttar Pradesh Special Task Force (STF) on Wednesday arrested a notorious gangster of the Jitender Gogi-Deepak Boxer gang after a brief exchange of fire in the national capital. The arrested accused, identified as Sandeep alias Baasi, received a bullet injury during the encounter. Deputy Commissioner of Police (Special Cell) Jasmeet Singh said on May 24, a specific information was received about the location of Sandeep. A team of STF/Meerut of UP Police, who had earlier arrived in the office of Special Cell, were also associated with the raiding party. A joint team was deployed near the informed location and around 5.00 a.m. in the morning, Sandeep was spotted near Shani Bazar Xing. "He was signalled to stop by the police, but instead he dropped the bike and fired three rounds towards police," the DCP said. The police also retaliated and Sandeep got wounded in his right leg on the knee. He was immediately rushed to Raja Harish Chander hospital for treatment and later, to Safdarjung hospital. Sandeep was previously arrested in four criminal cases including one of murder and three others in Delhi. He has disclosed that he was presently wanted and absconding in six heinous crimes including of sensational shootouts, murders, dacoity, robbery, assault & firing on police, abduction, car-jacking etc in Delhi, Uttar Pradesh, Uttrakhand and Haryana. /IANS