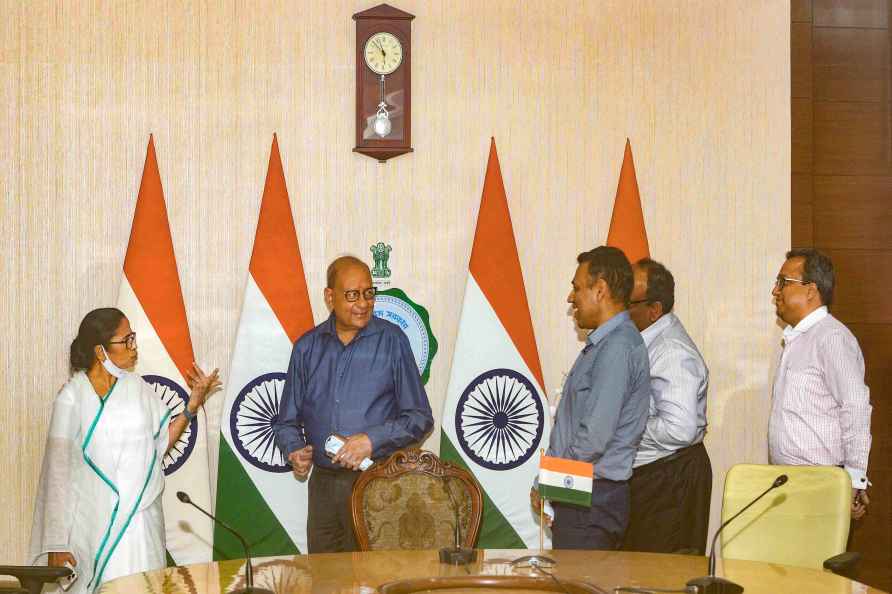 [**EDS: HANDOUT PHOTO MADE AVAILABLE FROM CMO (WB) ON WEDNESDAY, MAY 25, 2022** Howrah: West Bengal Chief Minister Mamata Banerjee with officials during the announcement of the collaboration between Emami Group and SC East Bengal, at Nabanna, in Howrah. ( /PTI] Kolkata, May 25 : A day after a senior West Bengal government official announced the date for Gorkhaland Territorial Administration (GTA) polls, Gorkha Janmukti Morcha (GJM) supremo, Bimal Gurung on Wednesday launched a fast at Darjeeling against the poll decision. As per announcement made on Tuesday, the polls for GTA will be conducted on June 26 and the counting will be on June 29. Gurung, who began his agitation at the Darjeeling crossing, said that he had earlier informed West Bengal Chief Minister, Mamata Banerjee to refrain from GTA polls till a permanent political solution in the hills. He also threatened to go for a fast-unto-death agitation if the state government goes ahead with the polls before reaching a permanent political solution. In his letter to Banerjee on May 14, Gurung stressed that a bipartite discussion on this count is absolutely necessary to find out ways for the permanent political solution. He also stressed on immediate progress in granting of the scheduled tribe status for the 11 Gorkha sects. On Wednesday, Gurung said although the Chief Minister assured him that a permanent political solution would be arrived at, the state government announced the poll dates without fulfilling that commitment. "We neither have any faith in the Union government nor in the state government, since none of them have honoured their commitment to fulfilling Gorkha aspirations. So, I have decided to go for fasting agitation and if necessary, that will extend to fast-unto-death agitation," he said. Extending his support to Gurung, BJP state President Dr Sukanta Majumdar said that his party had been saying since the beginning that the GTA polls can never bring about a permanent political solution in the hills. He also said his party is mulling ways to take legal recourse on this issue. The BJP, the GJM, and the Gorkha National Liberation Front (GNLF) are opposing the GTA elections. According to them, the elections for GTA would be irrelevant without a permanent political solution in force. However, besides the state's ruling Trinamool Congress and the other hill-based political forces like the Hamro Party, the Bharatiya Gorkha Prajatantrik Morcha, the Jana Andolan Party, and the Bharatiya Gorkha Suraksha Parishad are in favour of immediate GTA polls. /IANS

Two dead, several injured in Oslo nightclub shooting
[Police stand guard at the site of a mass shooting in Oslo, early Saturday, June 25, 2022. A few people were killed and more than a dozen injured earl

'America ... you're in for the fight of your life': Hollywood celebs slam abortion ruling

Los Angeles, June 25 : The decision of the U.S. Supreme Court to overturn its historic Roe v. Wade abortion rights decision in its 50th year, has been greeted with widespread criticism from American c […]

[South Korean Prime Minister Han Duck-soo, bottom center, salutes with veterans of the Korean War and other participants during a ceremony marking the 72nd anniversary of the outbreak of the Korean Wa […]