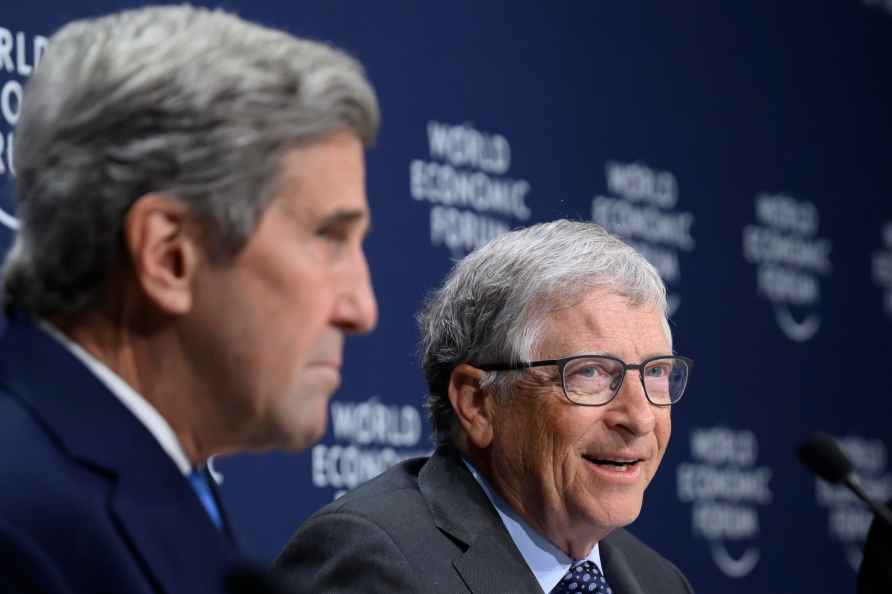 [John F. Kerry, Special Presidential Envoy for Climate of the United States of America, left, and William H. Gates, Co-Chair, Bill & Melinda Gates Foundation, USA, right, attend a Press Conference on First Movers Coalition Announce Expansion, during the 51st annual meeting of the World Economic Forum, WEF, in Davos, Switzerland, on Wednesday, May 25, 2022. The forum has been postponed due to the Covid-19 outbreak and was rescheduled to early summer. The meeting brings together entrepreneurs, scientists, corporate and political leaders in Davos under the topic "History at a Turning Point: Government Policies and Business Strategies" from 22 - 26 May 2022. /PTI] Davos, May 25 : India has joined the US-led First Movers Coalition, a flagship public-private partnership to clean up the most carbon-intensive industry sectors, from heavy industry to long distance transport. The coalition on Wednesday announced a major expansion to more than 50 corporate members worth about $8.5 trillion and a total of nine leading governments, including the US, covering over 40 per cent of global GDP. US Special Presidential Envoy for Climate John Kerry made the announcement alongside Bill Gates, founder of Breakthrough Energy, at a press briefing hosted by the World Economic Forum. In addition to the US government, the coalition welcomed India, Japan, and Sweden to the steering board, as well as Denmark, Italy, Norway, Singapore and the UK as government partners. These government partners will invite companies from their countries to join the coalition and will pursue public policies to commercialise the green technologies corporate members commit to purchasing. Led by the World Economic Forum and the US government, the First Movers Coalition targets sectors including aluminium, aviation, chemicals, concrete, shipping, steel and trucking, which are responsible for 30 per cent of global emissions - a proportion expected to rise to over 50 per cent by mid-century without urgent progress on clean technology innovations. For these sectors to decarbonise at the speed needed to keep the planet on a 1.5-degree pathway, they require low-carbon technologies that are not yet competitive with current carbon-intensive solutions but must reach commercial scale by 2030 to achieve net-zero emissions globally by 2050. To jump-start the market, the coalition's members commit to purchasing -- out of their total industrial materials and long-distance transport spending -- a percentage from suppliers using near-zero or zero-carbon solutions, despite the premium cost. If enough global companies commit a certain percentage of their future purchasing to clean technologies in this decade, this will create a market tipping point that will accelerate their affordability and drive long-term, net-zero transformation across industrial value chains. The coalition is launching two new sectors: carbon dioxide removal and aluminium, which join the four existing sectoral pledges (aviation, shipping, steel and trucking) launched at COP26. Piyush Goyal, Minister of Commerce and Industry, said: "India has been at the forefront of climate change actions. The idea of LIFE -- 'Lifestyle For Environment' -- as highlighted by Prime Minister Narendra Modi and the call for a global mass movement on sustainable lifestyles, is very critical for combating climate change." "India has also taken global leadership with initiatives like the International Solar Alliance, One Sun One World One Grid, and the Coalition for Disaster Resilient Infrastructure. We believe that the need of the hour is to strengthen technological innovation so as to have cost-effective climate technologies on a larger scale. "The First Movers Coalition has a huge role to play in this and to achieve our climate goals." US Special Presidential Envoy Kerry said the purchasing commitments made by the First Movers Coalition represent the highest-leverage climate action that companies can take because creating the early markets to scale advanced technologies materially reduces the whole world's emissions -- not just any company's own footprint. "With today's expansion, the coalition has achieved scale across the world's leading companies and support from committed governments around the world to tackle the hardest challenge of the climate crisis: reducing the emissions from the sectors where we don't yet have the toolkit to replace unabated fossil fuels and swiftly reach net-zero emissions." Borge Brende, World Economic Forum President, said: "The coalition's members are truly the 'first movers' who are focused on scaling disruptive innovations that pave the way for long-term transformation rather than the lower-hanging fruit of short-term process efficiency gains." "Once the tipping point is reached in the market, the First Movers Coalition will demonstrate that a net or near-zero transformation across the value chain is not only possible but that it will be no more expensive than the high-emitting alternative." /IANS

Depressed patient jumps off 8th floor of Kolkata hospital; critical
[Kolkata: A patient falls of the edge of a cornice on the seventh floor of the Institute of Neuroscience Hospital after sneaking out of his ward, in K

Top US delegation to visit SL to help avert crisis

Mumbai, June 25 : Actress Mrunal Thakur will be seen playing a fierce police officer in the upcoming thriller 'Gumraah' and is leaving no stone unturned to prepare for the character. "For portra […]

Los Angeles, June 25 : The three states of California, Oregon and Washington in the US West Coast announced that they will continue protecting abortion access despite the Supreme Court overturning its […]