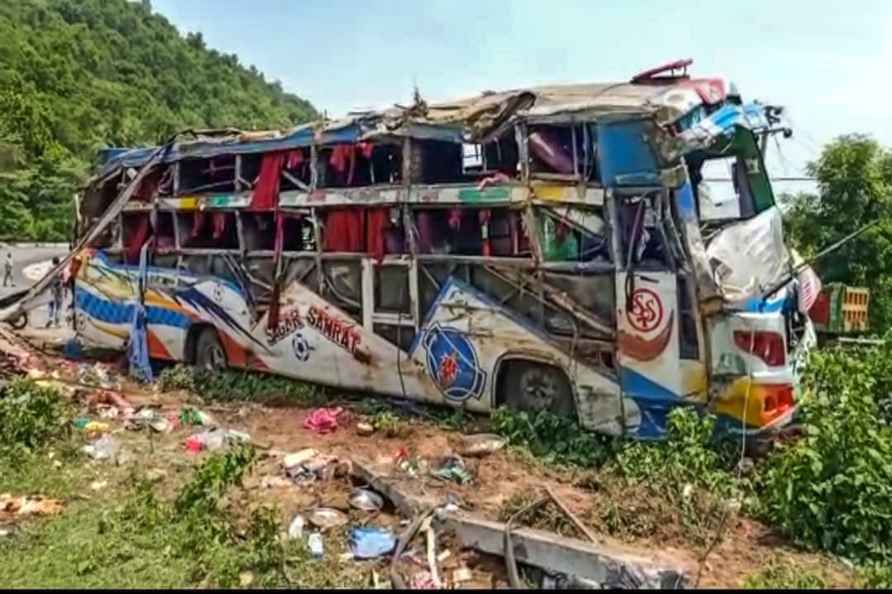 [**EDS: BEST QUALITY AVAILABLE** Ganjam: Mangled remains of a tourist bus which overturned rolled down off the road at Kalinga Ghati, in Ganjam district, Wednesday, May 25, 2022. Six tourists were killed and 40 others injured in the mishap that took place Tuesday night. ( /PTI] Bhubaneswar, May 25 : At least six tourists from West Bengal were killed and more than 40 injured when the bus, in which they were travelling, met with an accident on Kalinga ghat in Odisha's Ganjam district, police said on Wednesday. The bus was heading towards Visakhapatnam after the tourists from Udaynarayanpur area in Howrah district of West Bengal visited Daringbadi in Kandhamal district. Over 70 persons were onboard in the bus. The bus driver claimed that the mishap occurred late on Tuesday night due to brake failure. "We left Daringbadi at around 7.30 p.m. and had our dinner before the Kalinga ghat. While coming down from the ghat, suddenly the brake failed and I alerted the passengers. After hitting several electric poles, the bus overturned," said the diver, who also sustained injury in the accident. Soon after receiving the information, local police teams and fire service personnel rushed to the spot and started the rescue operation. The rescue operation continued till Wednesday morning, the police said. As per latest report, the deceased were indentified as -- Supriya Denre, Sanjeet Patra, Rima Denre, Mausumi Denra, Barnali Manna and Swapan Gushait. The injured were admitted to a local hospital at Bhanjanagar for treatment. Among them, 15 were shifted to MKCG Medical College and Hospital in Berhampur due to their critical health condition. "The patients have been admitted in surgery and orthopaedic departments. Excluding one woman who got head injury, the health condition of others is stable till now. A dedicated team of doctors are treating the patients," said an official of MKCG Medical College. Meanwhile, State Transport Minister Padmanabha Behera said he has ordered a probe into the bus mishap. Chief Minister Naveen Patnaik mourned the deaths and prayed for the recovery of injured tourists. "We have seen in the past also that buses from other states met with accidents in the Kalinga ghat as the drivers don't have experience driving buses in such a long ghat area. So, we will issue an advisory to buses coming from other states to choose alternative routes," Behera said. /IANS

Even if a Hindu nation is created, will it remain so: Gehlot

Jaipur, June 22 : Mounting an attack on the BJP and the RSS, Rajasthan Chief Minister on Wednesday said the BJP members are provoking people to create communal disharmony in the country. He questioned […]

Jaipur, June 22 : The RSS All India Prant Pracharak Baithak will be organised on July 7, 8 and 9 in Rajasthan's Jhunjhunu district, said Sunil Ambekar, Akhil Bharatiya Prachar Pramukh, RSS. In a […]

Mumbai, June 22 : Anurag Kashyap's revenge thriller "Gangs Of Wasseypur", which completed a decade on Wednesday, continues to retain the interest of movie buffs. One of the major highlights of t […]