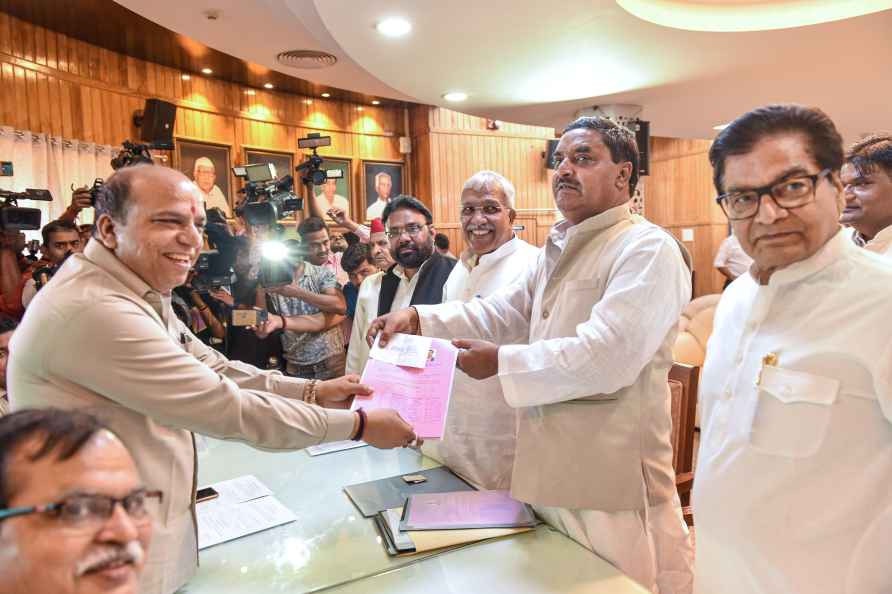 [Lucknow: Samajwadi Party candidate Javed Ali Khan files his nomination papers for Rajya Sabha, at Vidhan Bhavan in Lucknow, Wednesday, May 25, 2022. Samajwadi Party MP Ram Gopal Yadav is also seen. ( /PTI] Lucknow, May 25 : Senior leader and former minister Kapil Sibal on Wednesday filed the nomination for Rajya Sabha as independent with Samajwadi Party's support in the presence of party chief Akhilesh Yadav. Sibal said he had resigned from the Congress on May 16 and is an independent voice. Both Akhilesh Yadav and Kapil Sibal indicated that Sibal has not joined the Samajwadi Party. "I have filed nomination as an independent candidate. I have always wanted to be an independent voice in the country," Sibal said adding, "On May 16, I resigned from the Congress Party." Sibal is known to have close ties with the Yadav family as a senior advocate. He had argued in January 2017 (during the Yadav family feud) at the Election Commission that Akhilesh Yadav should get the 'Bicycle' symbol. Eventually, he got it. Notably, the veteran leader was a Union Minister in UPA government and off-late was very critical of Rahul Gandhi and the functioning of the party. Three parties, including RJD and JMM, were inclined to support him but he chose SP. The SP needs Sibal to reach out to Azam Khan who is upset with the party and whose case Sibal is fighting in the courts. In 2016, Sibal was elected to the Rajya Sabha from UP as Congress candidate supported by the then ruling Samajwadi Party but now, since the Congress has only two MLAs in the state Assembly, is not in a position to elect anybody. In UP, where the election to 11 seats is due, the BJP can win seven and the Samajwadi Party three seats - and the latter will still have 20 surplus votes. However, problem will arise for the 11th seat if the BJP fields its eighth candidate, which will necessitate an election. It is here that the surplus votes will be key. However, the ruling BJP has an advantage as it needs less than 10 votes but the opposition is short of 15 votes. While Sibal is legally involved in court cases of JMM and Samajwadi Party leaders in various high courts and the Supreme Court, so it is being speculated that the parties may favour his candidature. The Congress can elect eight Rajya Sabha members from Rajasthan, Karnataka, Haryana, Maharashtra, Madhya Pradesh and Chhattisgarh and two more can come with support of allies in Tamil Nadu and Jharkhand. Anand Sharma, Ghulam Nabi Azad and P. Chidambaram are hopefuls. Sharma is hoping to be elected from Haryana, but sources say Kumari Selja and Randeep Singh Surjewala are contenders too. Chidambaram may get a renomination from his home state of Tamil Nadu. /IANS

Chennai, June 22 : India will put into orbit three foreign satellites for a fee on June 30 with its Polar Satellite Launch Vehicle (PSLV) rocket. The mission is code named PSLV-C53/DS-EO. […]

Mumbai June 22 : Reliance Games have come up with a unique initiative to raise awareness regarding the hazards of plastics among children and youth. In support of the United Nations Environment […]

Eastbourne, June 22 : Italy's Camila Giorgi reached the quarterfinal of the Rothesay International here on Wednesday after beating Spain's Garbine Muguruza 7-5, 6-3 in 1 hour and 53 minutes in the thi […]

IND v SL: Jemimah will give her best whenever any opportunity comes in her way, says Harmanpreet

Dambulla, June 22 : Ahead of the T20I series opener against Sri Lanka at Dambulla on Thursday, India skipper Harmanpreet Kaur was confident that Jemimah Rodrigues will give her best whenever any oppor […]