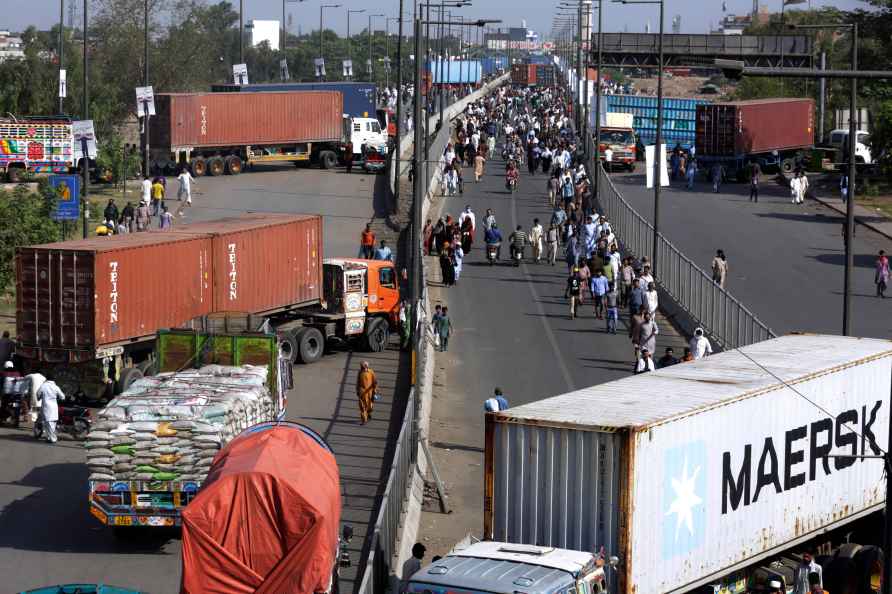 [People walk on a highway, which block with shipping containers placed by authorities in an attempt to foil a planned rally, in Lahore, Pakistan, Wednesday, May 25, 2022. Pakistani authorities blocked off all major roads into the capital Islamabad on Wednesday, after a defiant former Prime Minister Imran Khan said he would march with demonstrators to the city center for a rally he hopes will bring down the government and force early elections. /PTI] Islamabad, May 25 : The Pakistan government has decided to detain Pakistan Tehreek-e-Insaf (PTI) Chairman Imran Khan with the top party leadership on its way to Islamabad from Peshawar on Wednesday, a top officer responsible for security arrangements said. The authorities during detailed meetings with different agencies have discussed aspects after the detention but finally decided to use all resources to go ahead with the plan, sources said. "Though it appears an unfeasible task to arrest them during the long march yet the government has no option but to detain them to stop possible carnage," the sources maintained, The News reported. They added that according to reports of intelligence agencies, the PTI activists will be well-equipped to counter any resistance from the law enforcement agencies and the government agencies are well aware of the situation that in these circumstances, a clash could not be averted. Condemning the crackdown on party workers, particularly in Punjab, to prevent them from participating in the long march, Imran Khan on Tuesday vowed to reach Islamabad at all costs. "We will reach Islamabad at all costs and will stay there till the dissolution of the National Assembly and announcement of date for holding free and fair elections in the country," he told reporters at the Chief Minister's House in Islamabad. The PTI Chairman gave the example of the Afghan people (Taliban), saying how the Afghans fought the foreign powers and forced them to flee the country. He urged the people to break the chains of fear and come out in his support of a 'real azadi' (freedom). Imran Khan and the PTI Central leadership have been based in Peshawar since last Friday to chalk out a strategy against the government and mobilise the party workers to ensure their participation in what they called was the 'Azadi March', The News reported. /IANS

Depressed patient jumps off 8th floor of Kolkata hospital; critical
[Kolkata: A patient falls of the edge of a cornice on the seventh floor of the Institute of Neuroscience Hospital after sneaking out of his ward, in K

Sultan Palace to be demolished