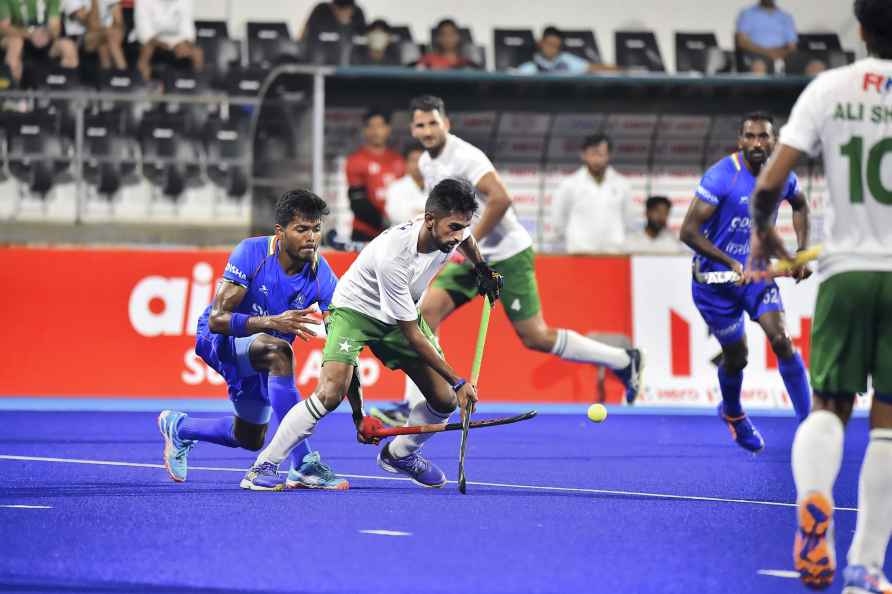 [**EDS: TWITTER IMAGE POSTED BY @TheHockeyIndia ON MONDAY, MAY 23, 2022** Jakarta: Indian (in blue) and Pakistani players vie for the ball during their Hero Asia Cup 2022 hockey match, at the GBK Hockey field in Jakarta, Indonesia. ( /PTI] Jakarta, May 23 : Malaysia and South Korea made winning starts to their campaign on the opening day of Asia Cup hockey, defeating Oman and Bangladesh respectively at the GBK Arena here on Monday. While Malaysia defeated Oman 7-0, Korea got the better of Bangladesh 6-1. Riding on a hat-trick of goals by penalty-corner specialist Razie Rahim in the 6th, 13th and 19th minute, Malaysia posted a strong 7-0 win in their first Pool B match. The early 3-0 lead put them in advantage with experienced striker Faizal Saari pushing the lead to 4-0 with a fine goal in the 23rd minute. The 10-minute half-time break gave Malaysia time to improvise their strategy as they came back stronger in the latter half of the match with better communication and structure to their play. They gave little room to Oman to create scoring opportunities, and their defence did well to stop their rivals from converting the few PCs they were awarded. "I was happy with the way the team closed down the game in the first two quarters and that made it easier for the team to finish off the last two quarters," said head coach Arul Anthoni. Goals by Shahril Saabah in the 34th minute, Faiz Jali in the 40th and Ashran Hamsani in the 48th minute ensured Malaysia ended up with the winning points. "We spent a month in Europe before coming here and that really helped in team bonding. The mentality of wanting to win in every match is very important particularly after three years of not being able to play hockey. "From here on, we want to take one-match-at-a-time. Our first target is to finish in the top-2 in the pool stage," Anthoni added. In the second match, Asian Champions Trophy title holders Korea beat Bangladesh 6-1 in their Pool B match. Despite the humid conditions here, the team lived up to the billing and delivered a strong performance. They overcame a sloppy start, having conceded an early goal to Bangladesh in the sixth minute through a penalty corner by Khorshadur Rahman, and ensured they converted from the penalty corners they created. As many as four goals came from PC specialists Taeil Hwang (13'), Jonghyun Jang (18', 52') and Jihun Yang (45') while Hwang also added a field goal to his name in the 22nd minute and Namyong too scored a goal in the 32nd minute. "The last time we played in the World Cup was 14 years ago. After winning the Asian Champions trophy in December, we kept a target of doing well here in Hero Asia Cup to qualify for the World Cup in Bhubaneswar. The team played to the plan and it was important to score a big win," stated Korea head coach Shin Seok Kyo. /IANS

This man has done double intermediate at 67

Bijnor (UP), June 22 : There are innumerable cases of people having two masters' degrees but rarely does one find someone doing a double intermediate and that too, after a gap of almost 50 years. […]

Kiev, June 22 : Ukrainian President Volodymyr Zelensky has said that the seventh package of EU sanctions against Russia must be approved as soon as possible. "In all negotiations with foreign pa […]

Gros Islet (St Lucia), June 22 : West Indies will look to make a clean sweep of the two-Test series when they take on Bangladesh in the second game at the Daren Sammy National Cricket Stadium beginnin […]

Bengaluru, June 22 : Karnataka High Court has upheld the order of dismissal of eight CISF constables from service in connection with alleged gang rape and blackmail case. The accused had alleged […]