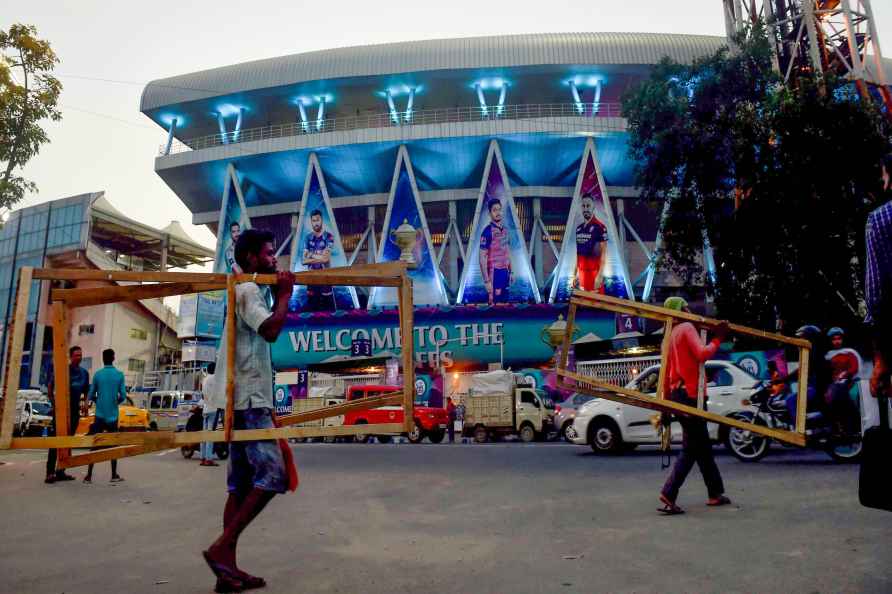 [Kolkata: Preparations underway at Eden Gardens on the eve of the Indian Premier League 2022 play-off cricket match between Gujarat Titans and Rajasthan Royals, in Kolkata, Monday, May 23, 2022. ( /PTI] Kolkata, May 23 : In the newbies Gujarat Titans' impressive run in the 2022 Indian Premier League (IPL), the captaincy skills of Hardik Pandya has been a vital cog in the wheel, speaking to the bowlers and having good communication with everyone in the team. Hence, it wasn't surprising that on the eve of Qualifier 1 match against Rajasthan Royals at the Eden Gardens, Vikram Solanki, Gujarat's director of cricket, acknowledged that Pandya's captaincy and involvement in the game has played a huge part in the success of the side in the tournament. "He has grown as a leader. He has taken to the captaincy very well. He has been very giving of his time and has really sort of involved. That is what exactly is paying off. He is having conversations with each and every bowler. Of course, someone like a Shami needs no guidance. But it is always useful to have a connection or understanding of what they are planning to do," said Solanki in the pre-match virtual press conference. "Hardik's display of captaincy is actually interacting with the bowler, which is just quick communication playing out and making sure that our plans are in place and everybody is on same sort of page. What I will add again is to reiterate the fact that Hardik's captaincy has been a big part of our success. He's absolutely been involved in every aspect of our campaign and long may he continue to do so," added Solanki, a former England batter. In the form of Shubman Gill and Wriddhiman Saha, Gujarat have found a dependable opening pair though the latter has been the aggressor of late in power-play. Solanki quashed suggestions that the opening pair of Gill, in particular, and Saha are a weak point for the side, citing the former's 63 not out off 49 balls and carried his bat through the innings on a tough Pune pitch against Lucknow Super Giants. "I would disagree with it because the partnership created by Shubman and Wridhhi has been a very good one for us. What you are saying about Shubman's performance, it is incorrect according to me. Shubman has made so many match-winning contributions on his own abilities. For example, you can see the match against LSG, the way he handled his knock and controlled the whole innings, he gave us a chance to put up a defendable score, and then we were able to win the match." "I am in total disagreement with your assessment. As far as opening partnership is concerned, at the moment, Wriddhi (Wriddhiman Saha) and Shubman are an ideal combination. They compliment each other in their style of play and having Wriddhi around Shubman works very well because they communicate and have a good understanding, which works well for our opening partnership." In three out of Gujarat's four losses in the league stage, top-order collapses of the side stood out as a common thread. Losing wickets back-to-back was also something which Pandya had said they would like to avoid in the playoffs after Gujarat's loss to Bangalore in their final league match. Asked about what has been his discussion with the batting group on avoiding wickets back-to-back, Solanki explained, "It's a good question. But it is a common held view across all ages that there is no value in losing wickets. Jab se cricket chala hain, yeh baat toh pakki hain ki agar aap wicket lose naa kare, toh you are in a better position. (Since the time cricket has begun, it's absolutely certain that if you don't lose wicket, you are better placed). If you happen to lose wickets in a cluster, you always put yourself under pressure." "It's not necessary that anyone in management, coaching or captain has to have discussion with the players on this. Players are experienced, they are playing IPL and international cricket and are well-versed with exactly what is required. There are obvious dangers in losing wickets in a cluster; it's a given matter. That said, sometimes when it happens, you have to react and respond to that. There is no sort of signs to it and no surety that you will lose wickets in a cluster." "You can manage risk, certainly evaluate what is appropriately required at that time. But then, that's a fine balance as well. We are playing T20 format and are constantly needing to balance risk and actual mindful batting, which is a common thing. I assure you all teams will be exactly of the same mindset: don't lose wickets in a cluster, give ourselves opportunity to create partnerships and make use of it by putting the opposition under pressure. It's exactly the same phase." /IANS

Kolkata, June 22 : India's pace all-rounder Rumeli Dhar on Wednesday announced her retirement from all formats of the game, ending a career where she starred with crucial match-winning contributions f […]

Kanpur, June 22 : A Special POCSO court has rejected the bail application of accused Rehan, charged with physical exploitation of a mentally-retarded minor girl in Kanpur in Uttar Pradesh. Judge […]