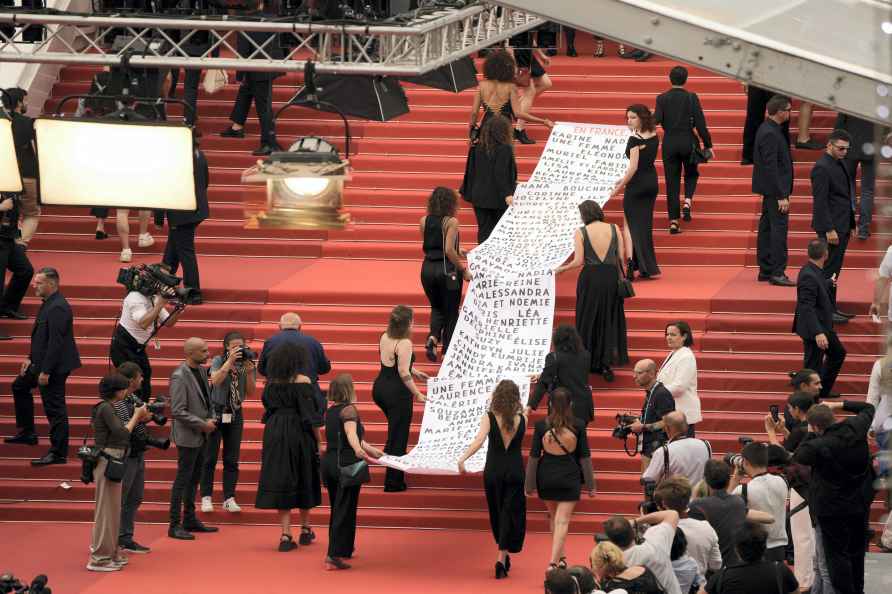 [A banner is unveiled with a list of names and that reads at the end "129 feminicides since the last Cannes festival" at the premiere of the film 'Holy Spider' at the 75th international film festival, Cannes, southern France, Sunday, May 22, 2022. ( /PTI] Los Angeles, May 22 : South star Pooja Hegde, who has made her debut at the 75th annual Cannes Film Festival, is hoping to inspire young Indian girls to dream big. She was invited to represent her homeland at the Cannes Film Festival where India is the country of honour this year, reports 'Deadline'. The rising star, who works across Tamil, Telugu and Hindi movies has a number of hit credits to her name and is currently shooting 'Kabhi Eid Kabhi Diwali' opposite Salman Khan, while her turn in Rohit Shetty's comedy 'Cirkus' is due in December. Hegde also has a lot more stories to tell, saying "I want to do more films for women because I genuinely think that we are not represented enough. When I see a powerful woman on film, you want to emulate them, you want to be them, and I hope I can be a small part of that in terms of inspiring girls in India to just dream a little bigger and tap their inner potential." Indian films have increasingly seen great box office success on a global stage, including the recent hits 'KGF: Chapter 2' and 'RRR'. That's encouraging to Hegde, both within and outside India. Citing Oscar winner Bong Joon-ho, Hegde said: "I think that it's time we stop looking at languages as a barrier; it's like the director of 'Parasite' said at the Oscars that if we get over that one-inch barrier of a subtitle we would be privy to such amazing content across the world, and across India." India, she noted, is "so culturally diverse and so culturally rich as a country, and I think film is a way to make us understand other people in a much more insightful way and personal waya We have it in us we just need to continue to tell our stories the way we want them to be told." /IANS

Five Republican Congress members favouring Trump impeachment fear being unseated
[This photo provided by the French Army, soldiers embark in a military plane in an undisclosed French city to take part to a force projection operatio

Kolkata, June 20 : The West Bengal cabinet, on Monday, approved a proposal to replace the Governor with the Chief Minister as the Chancellor of Aliah University, which is under the jurisdiction of the […]

Chandigarh, June 20 : The Haryana government on Monday ordered the closure of all private coaching institutions in Mahendragarh and Jhajjar districts with the protests against the Agnipath defence rec […]

Panaji, June 20 : The adventurous journey of 14 kilometres by jeep to Dudhsagar waterfall from Bhagwan Mahavir National Park at Collem in South Goa has been closed from Monday. More than two lak […]

Jammu: A construction machine stuck at Tawi River Front after sudden rise in the water level of the river, in Jammu, Wednesday, June 22, 2022. ( /PTI […]