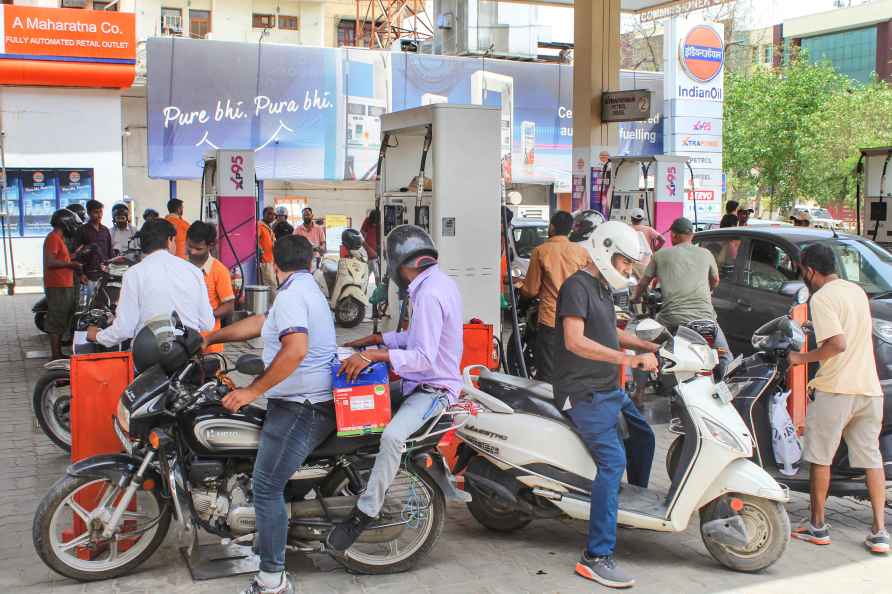 [Gurugram: People get their vehicles filled with fuel at a petrol pump in Gurugram, Sunday, May 22, 2022. The central government reduced excise duty on petrol by Rs 8 per litre and on diesel by Rs 6 per litre, on Saturday. ( /PTI] New Delhi, May 22 : A day after the reduction in excise duty on petrol and diesel, the Congress on Sunday said that the step was a political gimmick and not relief to people, as it was like 'three steps forward and two steps back'. Addressing a press conference here, Congress spokesperson Gaurav Vallabh said that the BJP government was clueless about the economy and financial management. "Instead of accepting it and seeking guidance from experts, the BJP only resorts to trickery to create an optical delusion. In yet another instance, the honourable Finance Minister put out a series of tweets announcing a series of actions that were purely meant to create a delusion," he said. The Finance Minister on Saturday announced a reduction of Rs 8 per litre on petrol and Rs 6 per litre on diesel in Central Excise. Vallabh said, "While it may seem a significant reduction in absolute terms, but the point of contention doesn't change," adding, "Three steps forward and two steps back doesn't mean it leads to any improvement in the lives of the common people." "The prices are back to the March 2022 numbers. Were the common people pleased at the fuel prices in March 2022? The answer is No. Is the government still charging a hefty excise on fuel? The answer is Yes. True relief will only come when the excise will be reduced to 2014 levels." Vallabh said. /IANS

MVA faces grim survival crisis as Sena Minister, MLAs on verge of revolt
[Thane: Policemen stand guard outside the residence of Shiv Sena leader Eknath Shinde, amid speculations of him joining BJP along with other Shiv Sena

Indian communication satellite to be launched by Arianespace on Wednesday
[The Nuri rocket, the first domestically produced space rocket, lifts off from a launch pad at the Naro Space Center in Goheung, South Korea, Tuesday,

There is an attempt to pull down govt in Maharashtra, happening for the third time: NCP chief Sharad Pawar.

There is an attempt to pull down govt in Maharashtra, happening for the third time: NCP chief Sharad Pawar. […]

New Delhi, June 20 : Apple may launch the second-generation model of AirTag that let users keep track of personal items like keys, wallet, purse, backpack, luggage and more through the Find My app. […]