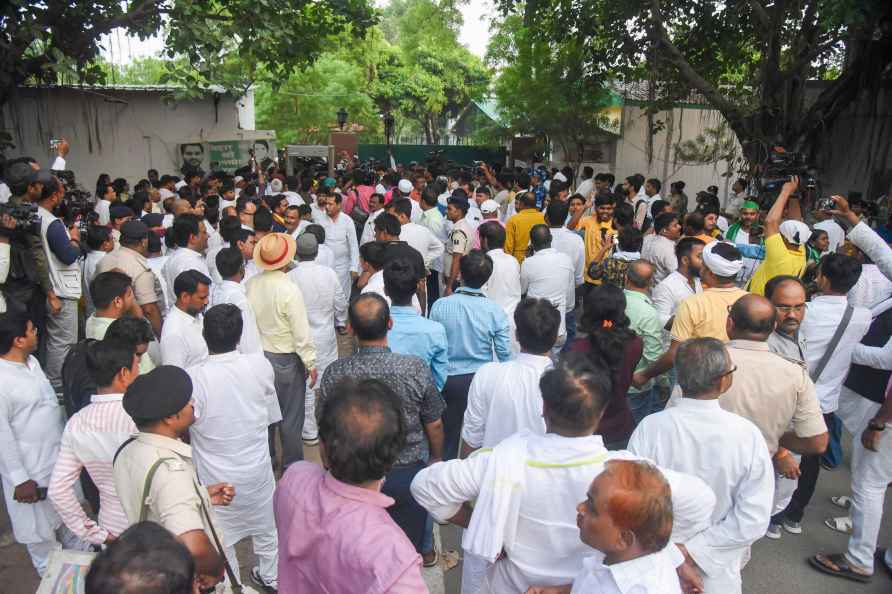 [Patna: Supporters protest outside the residence of RJD Chief Lalu Prasad during a raid by CBI in connection with an alleged land-for-jobs scam case, in Patna, Friday, May 20, 2022. ( /PTI] Patna, May 20 : Former Bihar Chief Minister Jitan Ram Manjhi on Friday blamed Leader of Opposition in state Assembly Tejashwi Yadav for CBI raids at more than 15 premises of RJD chief and former CM Lalu Prasad. Taking a dig at Tejashwi Yadav, Lalu Prasad's son, Manjhi tweeted in Hindi saying: "Ghar Ka Bhedi Lanka Dhaye, Mauka Dekh Bahar Udh Jaye (An insider causes maximum damage)." Currently, Tejashwi Yadav is on a London trip for a conference and is expected to return on May 23. Manjhi, through his tweet, was pointing at the timing of the raids. He was the one who said that Misa Bharti could be the next national president of the party and Lalu Prasad's family is suffering from deep internal dispute to hold the power. JD-U spokesperson Ajay Alok also took on Tejashwi Yadav saying: "Achcha Hai London mein London hai or Patna mein CBI hai. Pata nahi bhai shamat kiski hai. Raid To hamesha dukhdai hai. (Good that London is in London and CBI is in Patna, I don't know its spelling trouble for whom. Raids are always a bad news." Rajya Sabha MP and senior BJP leader Sushil Kumar Modi, who was instrumental in bringing the alleged railway and IRCTC scam in 2017 to the fore, said: "Lalu Prasad never got the land, acquired as bribe from job aspirants, registered in the names of his family members directly. He used get it registered in the names of his acquaintances and after five to six years, he would take it back in the form of gifts." "During his tenure as union railway minister, Lalu Prasad grabbed lands from dozens of job aspirants for the post of group-D. He believed in you (job aspirants) give me land and I will give you jobs of Group-D," Modi tweeted. Meanwhile, RJD supporters in Patna took to the streets in protest against the raids. A large number of supporters sat outside the Rabri Devi's residence at 10 circular road. Many of them also assembled outside Tej Pratap Yadav's residence. Besides Patna, raids are also underway in the house of Lalu's sister and two relatives -- Rajendra Yadav and Shiv Kumar Yadav -- in Itwa village under Uchka gaon village in Gopalganj. Another residence of Lalu Prasad in Hajiyapur village in Gopalganj district was also raided. /IANS

Birmingham: India's Rohit Tokas (blue) lands a punch on Ghana?s Alfred Kotey during the men's over 63.5kg-67kg (Welterweight) Round of 16 boxing match, at the Commonwealth Games 2022 (CWG), in Birming […]