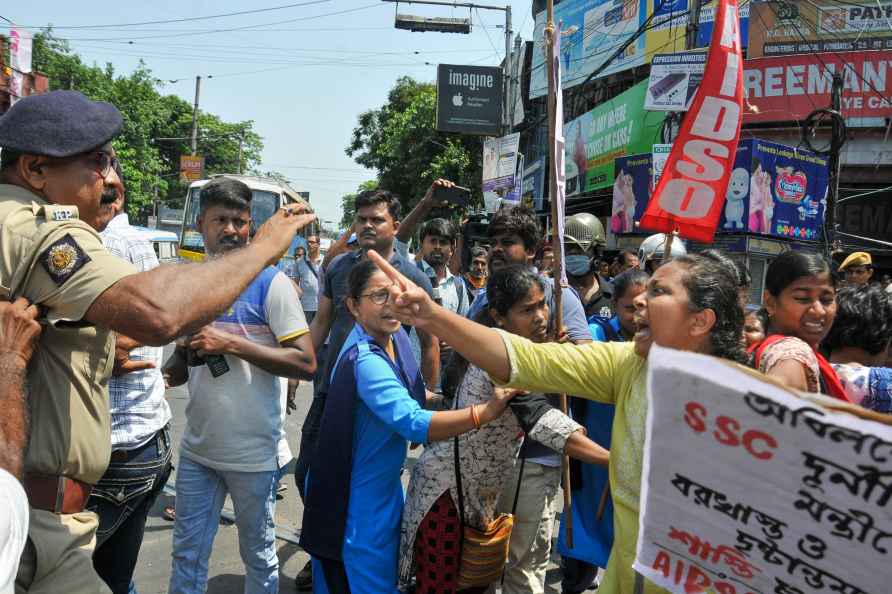 [Kolkata: Police personnel in a scuffle with members of All India Democratic Youth Organisation (AIDYO) and All India Democratic Students' Organisation (AIDSO) during their protest march towards West Bengal Chief Minister Mamata Banerjee's residence over the state ministers' involvement in the alleged SSC recruitment scam, in Kolkata, Friday, May 20, 2022. ( /PTI] Kolkata, May 20 : Calcutta High Court's single-judge bench of Justice Avijit Gangopdhaya on Friday ordered the immediate dismissal of Anikta Adhikari, daughter of West Bengal Minister of Education Paresh Chandra Adhikari from her services as a teacher of political science in one of the state-run schools. Paresh Chandra Adhikari, as per the order of the Calcutta High Court, is already facing a Central Bureau of Investigation (CBI) probe in connection with the alleged illegal recruitment of his daughter in a government school even though her name did not appear in the merit list and she did not even appear for the personality test. Justice Gangopadhyay's bench also ordered Ankita Adhikari to return to the state government the salary that she received till the time of her appointment in two phases. As per estimates she will have to return her salary of 43 months. The salary returned will have to be submitted to the registrar of the Calcutta High Court. Justice Gangopadhyay also ordered that Ankita Adhikari would not be able to enter the school premises where she was employed till further orders. Meanwhile, after finally appearing at the CBI's Nizam Palace office in Central Kolkata on Thursday evening, Paresh Chandra Adhikari was grilled by the CBI sleuths for about three and half hours. He arrived at the CBI office again on Friday morning and his interrogation process was on. Paresh Chandra Adhikari was the acting food minister of West Bengal from 2006 to 2011 during the previous Left Front regime led by the-then chief minister Buddhadeb Bhattacharjee. In August 2018, he joined the Trinamool Congress leaving his earlier party of All India Forward Bloc and was greeted in the party by the- then state education minister and Trinamool Congress secretary general, Partha Chatterjee. Within 72 hours from his joining Trinamool Congress, his daughter's name figured in the merit list. After the 2021 West Bengal Assembly election, he was made the minister of state for education. /IANS

As K'taka stares at Covid peak period, health authorities gear up for the worst

By M.K. Ashoka Bengaluru, June 19 : The state health authorities are crossing their fingers as Karnataka is nearing the Covid peak period. As per a report by the IIT Kanpur Technical Recommendation […]

By Ujwal Jalali New Delhi, June 19 : Police in the national capital are everyday finding new ways to reach out to the people in this new era of social media and virtual interactions. On Satur […]

UP BJP leader shot at by unidentified men

Mainpuri (Uttar Pradesh), June 19 : A Bharatiya Janata Party (BJP) leader has been shot at by unidentified assailants in Mainpuri, police officials said on Sunday. According to the police, two u […]

Is conman Sukesh Chandrashekhar on his way out of Tihar?

New Delhi, June 19 : Conman Sukesh Chandrashekhar, who is lodged in Tihar Jail since April 2017 in connection with a Rs 200 crore extortion case, is likely to be transferred from the high-security pri […]