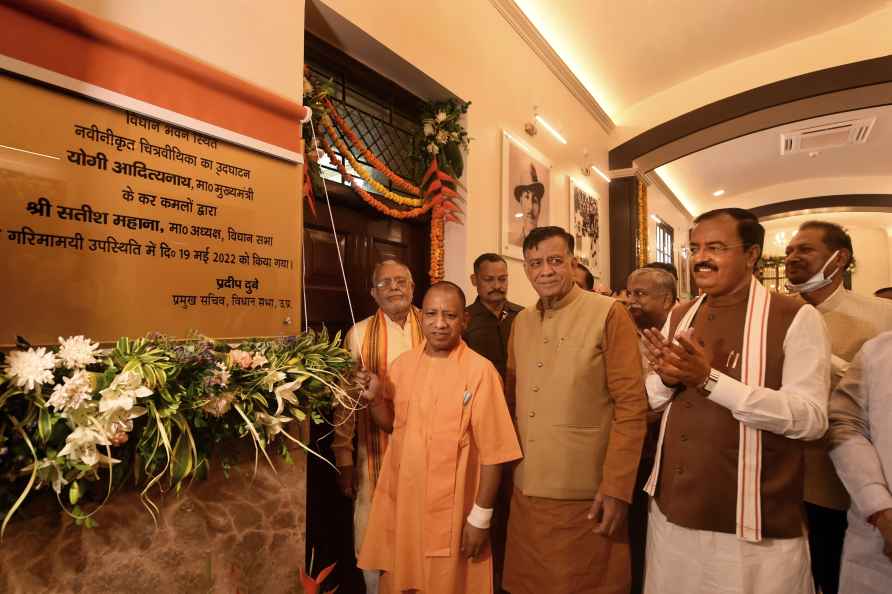 [Lucknow: Uttar Pradesh Chief Minister Yogi Adityanath inaugurates the renovated picture gallery in the Uttar Pradesh Vidhan Bhavan, in Lucknow, Thursday, May 19, 2022. Deputy CM Keshav Prasad Maurya and Assembly Speaker Satish Mahana are also seen. ( /PTI] Lucknow, May 19 : The Uttar Pradesh government is weaving a makeover for Banking Correspondent Sakhis, popularly known as BC Sakhis. The Yogi Adityanath government has decided to provide over one lakh sarees to BC Sakhis, designed by NIFT Rae Bareli. To promote the handloom industry, the UP government will provide two handloom sarees each to the women working under the BC Sakhi scheme as uniform. For this, the government will buy the sarees made by the powerloom weavers. According to the government spokesman, this will serve the twin purpose of empowering women and creating vast employment opportunities for handloom weavers in the state. Those weavers involved in the work will be given Rs 750 per sari as wages through DBT. K.P. Verma, managing director, UP Handlooms said that each of the 58,000 women working as BC Sakhi will be given two saris by the government. The designs sent by NIFT have been already approved by the chief minister and the work of weaving sarees is under progress. The cost of each saree comes to Rs 1,934.15 and a fund of Rs 22,43,61,400 has been released to the department for 1.16 lakh sarees and dress materials. The UP Handloom department has engaged five producer companies in this regard of which, three are from Varanasi district and one each from Mau and Azamgarh. UP Handlooms has already made a payment of Rs 1.20 crore to almost 537 weaver and over 12,837 sarees are ready. Verma said: "Due to the adverse economic conditions as a result of Covid-19, a crisis of employment had arisen for the weavers. Through this scheme, employment has been provided to the weaver. Also, the scheme has eliminated the role of middlemen and the money is being directly transferred into their bank account. The weavers covered by the scheme are getting maximum benefit and as a result, other handloom weavers are also getting attracted towards the scheme and enrolling themselves with the producer companies." Notably, in May 2020, the Uttar Pradesh Government had announced a proposal to induct 58,000 BC Sakhis-- one for every existing Gram Panchayat. This is expected to create an enormous effect by virtually establishing a one-stop solution for all banking needs of every local household at its doorstep. At present, the Department of Rural Development is conducting a thorough selection and recruitment process based on a robust mobile app-based mechanism. The incorporation of SHG members as BC Sakhis helps in ensuring financial inclusion, timely capitalisation, digitalisation of SHG transactions, and overall development of the community. It further strengthens the objective of building the entrepreneurial abilities of women. /IANS

Agnipath row: Security beefed up at railways stations, trains cancelled in TN
[Ranchi: Trains halt at the Ranchi Railway Station after several trains were cancelled due to a bandh called in protest against the Centre?s Agnipath

UP Board declares 12th class results

Meerut: Students celebrate their success after the UP Board declared its 12th class results, in Meerut, Saturday, June 18, 2022. ( /PTI […]

UP Board declares 10th class results

Varanasi: Students celebrate their success after the UP Board declared its 10th class results, in Varanasi, Saturday, June 18, 2022. ( /PTI […]

Chennai, June 18 : The Madras High Court will strictly follow Covid-19 protocols from Monday amid the spike in cases across Tamil Nadu, as well as the country. The court has made wearing masks, […]