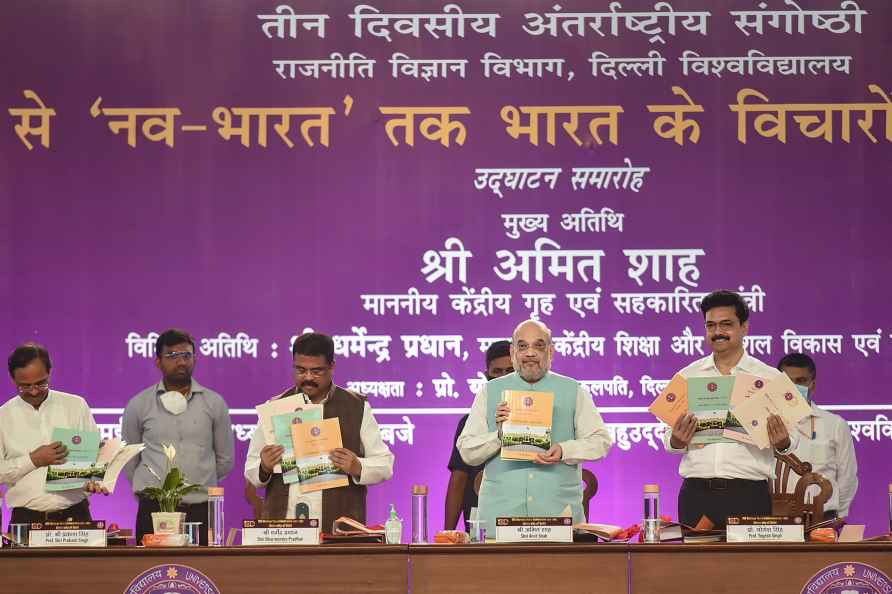 [New Delhi: Union Home Minister Amit Shah (2nd R) with Education Minister Dharmendra Pradhan (3rd R) releases a publication during the three-day international seminar titled ?Revisiting the Ideas of India from Swaraj to New India?, organised by the Delhi University's Political Science department, in New Delhi, Thursday, May 19, 2022. ( /PTI] New Delhi, May 19 : Punjab Chief Minister Bhagwant Mann will be meeting Union Home Minister Amit Shah on Thursday to discuss issues related to the border security, ongoing farmers' protest in the state and Bhakra Beas management board. The meeting is likely to take place this afternoon. He is likely to discuss the security issue of the border and update him on the investigation of the recent Rocket Propelled Grenade attack on state police intelligence headquarters at Mohali, the sources in the state administration said. Besides, the ongoing farmers protests near the Chandigarh- Mohali border, demanding bonus on the wheat prices will also figure in the discussion. Mann is likely to discuss the Centre's decision to deploy officers on two key posts in Bhakra Beas Management Board (BBMS) from outside of Punjab. On March 8, the then Congress Chief Minister Charanjit Sigh Channi also met Union Home Minister and requested him to reconsider the Centre's decision to appoint officers in BBMS outside from Punjab. The Centre had issued a notification in February this year to amend the provisions of BBMS 1974 rule for the selection criteria of appointment of the two key officers in the Bhakra Beas Board from outside Punjab. As per convention, posts of the two full-time members -- member (power) and member (irrigation) -- have always been filled by eligible candidates of Punjab and Haryana, respectively, from the panel of engineers nominated by respective state governments. BBMB is engaged in the regulation of the supply of water and electricity from Bhakra Nangal and Beas Projects to the states of Punjab, Haryana, Rajasthan, Himachal Pradesh, Delhi and Chandigarh. All political parties except BJP, are opposed to the amendment in the BBMS Rule 1974. /IANS

Kuortane Games: Neeraj Chopra clinches gold with a throw of 86.69 metres
[**EDS: FILE PHOTO** Tokyo: In this Saturday, Aug. 7, 2021 file photo, India's Neeraj Chopra reacts as he competes in the final of the men's javelin t

Los Angeles, June 18 : The production team of 'The Late Show With Stephen Colbert' was subjected to detention by law enforcement agencies in the US Capitol after filming comedy segments for the said s […]

With 'Dhaakad' earning just Rs 2.58 cr, has Kangana ceased to be a bankable star?

By Akshay Acharya Mumbai, June 18 : Bollywood films may not be witnessing the best of times at the box-office but the real shocker comes from the Kangana Ranaut-starrer 'Dhaakad' which managed to e […]

IND v SA: Karthik one of the best finishers in the game, says Maharaj