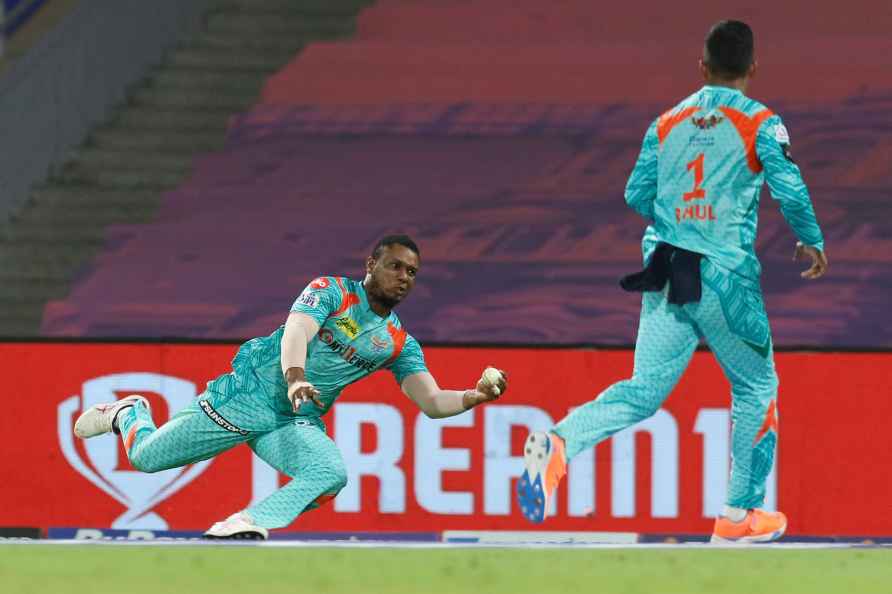 By Avinash Kr Atish Mumbai, May 19 : 'Catches win matches' is perhaps one of the most popular sayings in cricket and the IPL 2022 match between Kolkata Knight Riders and Lucknow Super Giants showed that it still holds true as one dropped catch and a spectacular one-handed grab changed the course of the game. It was debutant Abhijeet Tomar who dropped Quinton de Kock in the 3rd over of the innings bowled by Umesh Yadav and the Proteas batter made Kolkata pay for it. De Kock went for a wild slog and got a leading edge to third man where Tomar dropped a straightforward chance and it proved too costly for KKR in the thrilling 66th match of the IPL 2022 at the Dr DY Patil Stadium on Wednesday. The left-handed opener played a sensational knock (140 not out off 70) and along with LSG skipper KL Rahul (68 not out off 51), he powered Lucknow Super Giants to 210/0 in 20 overs, which eventually became a match-winning total. With his historic innings, de Kock recorded the third highest individual score in the IPL behind Chris Gayle (175 not out off 66) and Brendon McCullum (158 not out off 73). "I was a little bit cooked (after his innings) but it was a matter of getting some refreshments and getting on with it I guess. It was a bit of frustration that came out (on his aggressive century celebrations). Felt really good to come out and do well. Was trying to keep it in, but when it came out, it felt good," said de Kock after getting the Player of the Match award. Meanwhile, there was another catch, which completely turned the match in Lucknow's favour at the crucial juncture. Chasing a mammoth total, KKR needed 21 for the final over with Rinku Singh and Sunil Narine at the crease. Rinku hit Marcus Stoinis for 4, 6, 6 in the first three balls and took a double on the fourth delivery of the last over as KKR needed 5 runs in 3 balls. However, in the fifth ball of the over, Rinku got out courtesy of a spectacular one-handed catch by Evin Lewis. Stoinis floated one wide outside off and Rinku sliced that towards deep-point. Lewis ran in, put in a dive and stuck his left hand out to hold on to a one-handed stunner, which proved decisive in the end. Lucknow skipper KL Rahul praised Lewis for his brilliant catch. "Everyone has been brilliant, starting with Lewis, that catch was brilliant. He's been struggling with tummy issues for the last few weeks, been in and out of the team. Never easy. Didn't get to bat today. But that's what you want to see from players, their desire to contribute in any way possible," he said. /IANS

English white-ball cricket is remarkable; depth is impressive: Hussain
Amsterdam, June 18 : After England blasted a mammoth, record-breaking 498, laced with 36 fours and 26 sixes, in the first ODI against the Netherlands,

IND v SA: Dravid doesn't drop a player after one or two bad performances, says Avesh Khan
Rajkot, June 18 : Ahead of India's series opener against South Africa in New Delhi, head coach Rahul Dravid had spoken about how he was someone who li

A competitor dives in the Seine river near the Eiffel Tower as part...

A competitor dives in the Seine river near the Eiffel Tower as part of the Red Bull Cliff Diving event Saturday, June 18, 2022 in Paris. /AP-PTI […]

Mumbai, June 18 : Singer Stebin Ben is on cloud nine because of his recent collaboration with Mahesh Bhatt and Vikram Bhatt for their upcoming movie 'Judaa Hoke Bhi'. He has sung the title track of th […]