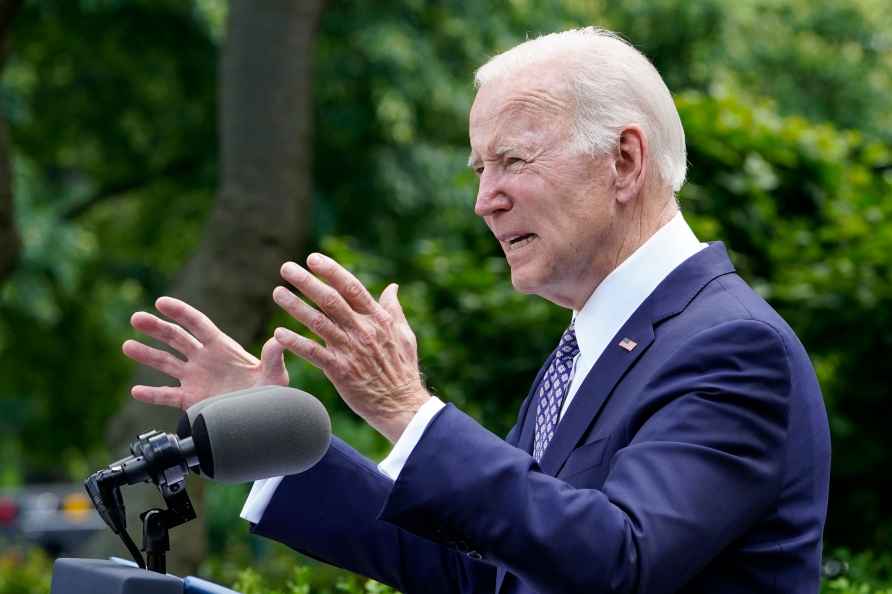 [Washington : President Joe Biden speaks in the Rose Garden of the White House in Washington, Tuesday, May 17, 2022. Biden's six-day trip to South Korea and Japan aims to build rapport with the Asian nations?─¶ leaders. Biden will also be trying to send an unmistakable message to China that Russia?─¶s faltering invasion of Ukraine should give Beijing pause about its own saber-rattling in the Pacific. Biden departs Thursday and is set to meet newly elected South Korean President Yoon Suk Yeol and Japanese Prime Minister Fumio Kishida. /PTI] Seoul, May 19 : An anticipated meeting between former South Korean President Moon Jae-in and U.S. President Joe Biden in Seoul this weekend is unlikely to take place, officials here and in Washington said Thursday. Biden is scheduled to arrive in South Korea on Friday for a three-day visit and hold his first summit with South Korean President Yoon Suk-yeol the following day. It was previously reported Moon may meet with Biden during his visit to Seoul, Yonhap News Agency reported. But U.S. National Security Advisor Jake Sullivan denied the reports in a press briefing at the White House on Wednesday, saying, "We don't have a meeting scheduled with (former) President Moon at this time." Those close to Moon said they have nothing to say about the U.S.' decision. "The meeting was initially pursued at the suggestion of the White House. If the White House has finally decided not to include the meeting in the schedule, we have nothing to say in addition to what was said," said an official. Moon left office on May 9 after serving a five-year term and is now staying in his retirement home in the southeastern city of Yangsan. /IANS

Kuortane Games: Neeraj Chopra clinches gold with a throw of 86.69 metres
[**EDS: FILE PHOTO** Tokyo: In this Saturday, Aug. 7, 2021 file photo, India's Neeraj Chopra reacts as he competes in the final of the men's javelin t

Thiruvananthapuram, June 18 : Several unemployed youths who have been waiting for a job in the army staged protest marches in Thiruvananthapuram and Kozhikode on Saturday. Most of the youths rea […]

Hyderabad, June 18 : The funeral procession of the youth killed in Friday's police firing at Secunderabad railway station was underway in Telangana's Warangal district amid shutdown and protest. […]

Cairo, June 18 : Egypt has lifted all Covid-19-related entry restrictions for all travellers -- Egyptian nationals and foreigners. The decision was made by the Supreme Committee for the Manageme […]