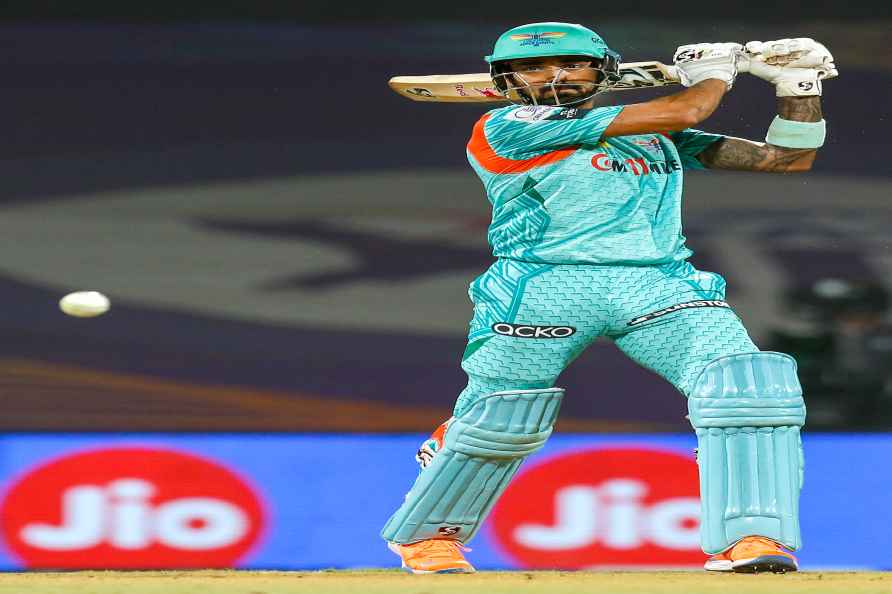 [Mumbai: KL Rahul, captain of Lucknow Super Giants plays a shot during the 66th T20 cricket match of the Indian Premier League 2022 (IPL season 15), between Lucknow Super Giants and Kolkata Knight Riders, at DY Patil Stadium in Mumbai, Wednesday, May 18, 2022. (Sportzpics for IPL/ /PTI] Mumbai, May 18 : Lucknow Super Giants captain KL Rahul won the toss and opted to bat first against Kolkata Knight Riders in the 66th match of the IPL 2022 at the Dr DY Patil Stadium, here on Wednesday. Lucknow made three changes in their playing XI as Manan Vohra, Evin Lewis and Krishnappa Gowtham came in place of Krunal Pandya (injured), Dushmantha Chameera and Ayush Badoni for this important clash. "We'll bat first. The pitch looks a bit dry. Last few games, it's been tough chasing. Try and get off to a good start and put a good total on the board. We have to be positive, we've done really well in the tournament. Even after losing the last two games, we are still sitting at 16 points, which speaks a lot about how we have played in the tournament. Couple of bad games is not going to change it. We need to turn up, start fresh, try to win this game and enjoy it. We'll focus all of our energy on this game," said Rahul at the toss. "We do have quality in that middle-order, everyone's experienced, they've played enough. You trust them to figure a way out, obviously it's not been the easiest season this time for the batters in the middle-order. You have to give them the benefit of doubt and we expect them to come back strong and deliver a match-winning performance," he added. On the other hand, the Shreyas Iyer-led Kolkata made just one change as Abhijeet Tomar replaced Ajinkya Rahane, who has been ruled out of the remainder of the IPL 2022 due to a hamstring injury. "I would have batted as well. If you see the history of their team, they have not been so solid while chasing. Even, we have been really good while batting first. I've just told them that this is going to be our last opportunity for us to express ourselves to the maximum(Message to the team). Let's do it for the coaches, management and for all the supporters who have been cheering right from the start and show them what kind of ability we've got to play at this level," he added. Playing XIs: Lucknow Super Giants: Quinton de Kock(w), KL Rahul(c), Evin Lewis, Deepak Hooda, Manan Vohra, Marcus Stoinis, Jason Holder, Krishnappa Gowtham, Mohsin Khan, Avesh Khan, Ravi Bishnoi Kolkata Knight Riders: Venkatesh Iyer, Abhijeet Tomar, Shreyas Iyer(c), Nitish Rana, Sam Billings(w), Rinku Singh, Andre Russell, Sunil Narine, Umesh Yadav, Tim Southee, Varun Chakaravarthy /IANS

Ottawa, June 18 : Canada's Chief Public Health Officer Theresa Tam confirmed a total of 168 cases of monkeypox in the country as of Friday. Speaking at a health briefing, the top doctor said tha […]

United Nations, June 18 : UN Secretary-General Antonio Guterres has called for actions to reverse the downward spiral of land degradation which results in drought and other nature disasters. "Le […]