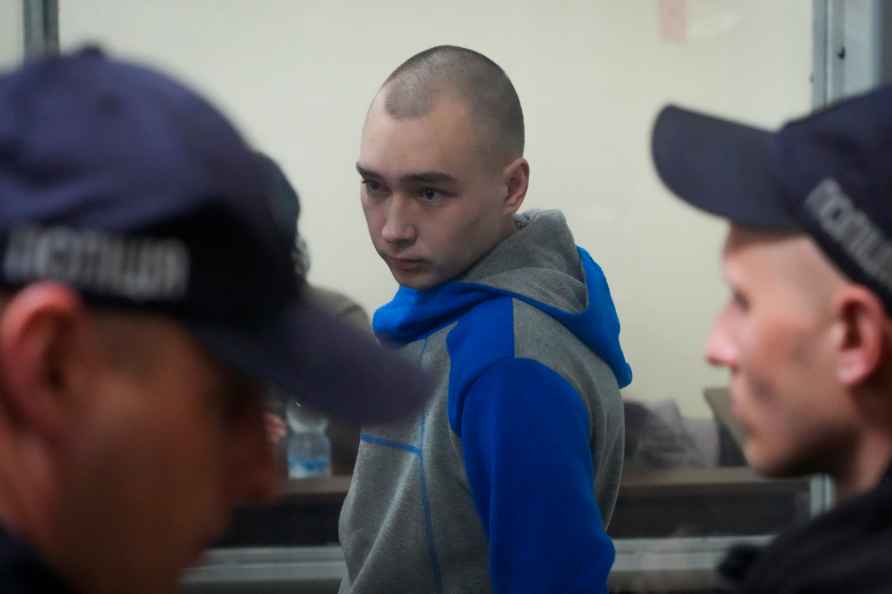 [Kyiv: Russian army Sergeant Vadim Shishimarin, 21, is seen behind a glass during a court hearing in Kyiv, Ukraine, Wednesday, May 18, 2022. The Russian soldier has gone on trial in Ukraine for the killing of an unarmed civilian. The case that opened in Kyiv marked the first time a member of the Russian military has been prosecuted for a war crime since Russia invaded Ukraine 11 weeks ago. /PTI] Kiev, May 18 : Ukraine will not exchange its territories for a peace deal with Russia, the government-run Ukrinform news agency reported, citing Mykhailo Podolyak, a member of the Ukrainian delegation to the peace talks with Russia. "It is ideologically unacceptable for us to give something to the Russian Federation and pretend that it was some kind of easy war," Podolyak said on Tuesday. He added that many Ukrainian civilians were either killed or assaulted in the conflict, making it impossible for Ukraine to make concessions to Russia, Xinhua news agency reported. Ukraine will not agree on a ceasefire with Russia without troop withdrawal as Russia will control part of Ukrainian territory, Podolyak said. He also ruled out the signing of a deal with Russia similar to the Minsk peace agreements, saying it would only lead to a frozen conflict, but not sustainable peace. Earlier on Tuesday, Podolyak said the negotiation process within the delegations between Ukraine and Russia has been suspended. At the same time, he voiced the belief that peace talks will resume. Ukraine and Russia held the latest round of their face-to-face peace talks in Istanbul of Turkey on March 29. The Minsk agreements, reached in September 2014 and February 2015 respectively, outlined the steps needed to end the conflict in Ukraine's eastern region of Donbas that started in April 2014. /IANS