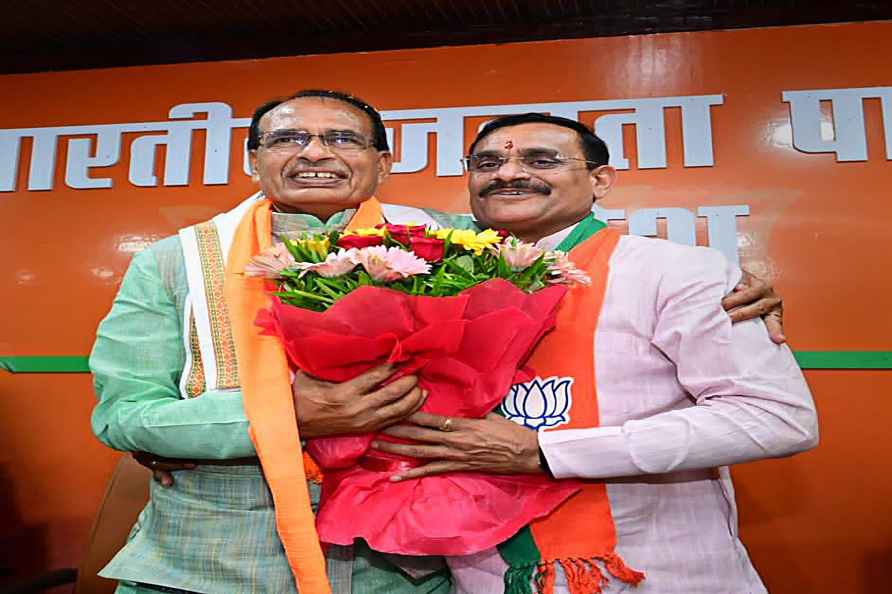 [Bhopal: Madhya Pradesh Chief Minister Shivraj Singh Chouhan greets BJP State President VD Sharma during a celebration after Supreme Court allowed OBC reservation in the local body elections in Madhya Pradesh, at BJP headquarters in Bhopal, Wednesday, May 18, 2022. ( /PTI] Bhopal, May 18 : As the Supreme Court on Wednesday allowed an OBC quota in the local body elections in Madhya Pradesh, the ruling BJP and the opposition Congress started taking the credit for it. Both the parties also traded barbs over the issue. Senior leaders of the BJP and the Congress in Madhya Pradesh welcomed the SC's decision saying, "justice prevailed", claiming that the initiative for providing reservation for OBCs was taken by their parties and accused each other of being anti-OBC. Soon after a bench headed by Justice A.M. Khanwilkar pronounced the order granting permission to conduct local body polls with OBC reservation and directed the Madhya Pradesh State Election Commission (MP-SEC) to notify the elections in one week, the state BJP headquarters celebrated the decision calling it a win for the party. Chief Minister Shivraj Singh Chouhan was greeted by state home minister Narottam Mishra and urban development minister Bhupendra Singh. The trio had visited New Delhi last week to file a review petition for seeking modification in the SC's order of May 10, in which the court had directed the state election body to conduct elections without OBC reservation. Expressing happiness over the SC's decision, Chouhan said, "We had made our intentions clear on this issue. We wanted the local body elections to be held with OBC reservation and all preparations were made for this purpose. The election dates were announced, but the Congress went to the court and the process was stayed. The Congress committed a sin for political gains, but today justice prevailed and the truth won." Chouhan said that his government made all possible efforts to provide reservation to the OBCs. "An OBC commission was set up and a survey was conducted across the state to collect facts regarding the same. When the SC demanded more clarity on reports, we submitted the second report and the court trusted the commission's report. Subsequently the decision to allow elections with OBC quota was pronounced," Chouhan added. He alleged that the Congress was in celebration mode after the SC's order of May 10. He said that the Congress was not interested in the OBC reservation issue but was attacking the BJP for political gains. On the other hand, the Congress maintained that it wanted local body elections with OBC reservation and for that the party fought strongly. "We were saying from day one that elections to Panchayat and urban bodies should not be held in Madhya Pradesh without OBC reservation. We had also fought regarding OBC reservation and after that the resolution was passed unanimously in the House," said Kamal Nath, former chief minister and Madhya Pradesh Congress chief. Nath said that the Supreme Court has given a decision to provide relief in the matter of OBC reservation. He claimed, "The OBC category will still not get the full benefit of OBC reservation increased from 14 per cent to 27 per cent by our government because the SC's decision mentioned that the reservation should not be more than 50 per cent." He said that if the state government had followed the entire procedure of the triple test on time, then this unpleasant situation would never have happened but the Shivraj government woke up after snatching the rights of the OBC class. /IANS

United Nations, June 18 : UN Secretary-General Antonio Guterres has called for actions to reverse the downward spiral of land degradation which results in drought and other nature disasters. "Le […]

DW BUREAU / Chandigarh Haryana Chief Minister, Manohar Lal has directed the officers of Marketing Board to take effective steps to check evasion of tax in the mandis so that the Marketing Board can […]

DW BUREAU / Chandigarh Haryana government gave double bonanza to the youth of the state on Friday. While the government has declared the result of Haryana Police Constable (Male), now the Haryana S […]