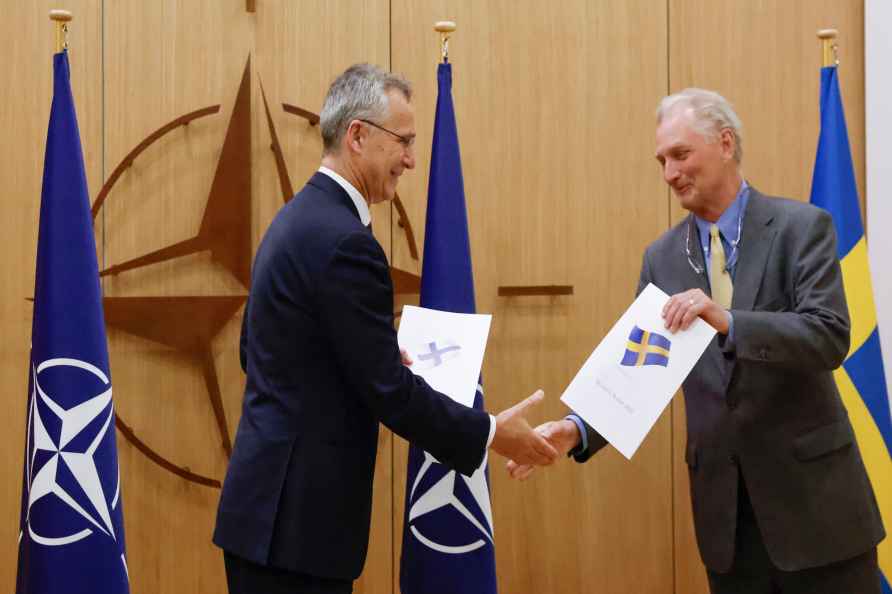 [Brussels: NATO Secretary-General Jens Stoltenberg and Sweden's Ambassador to NATO Axel Wernhoff shake hands during a ceremony to mark Sweden's and Finland's application for membership in Brussels, Belgium, Wednesday May 18, 2022. NATO Secretary-General Jens Stoltenberg said that the military alliance stands ready to seize a historic moment and move quickly on allowing Finland and Sweden to join its ranks, after the two countries submitted their membership requests. /PTI] Helsinki, May 18 : Finland's Foreign Minister Pekka Haavisto has signed the letter informing the NATO about his country's interest in engaging in accession talks. The Minister signed the letter on Tuesday, Xinhua news agency reported. Earlier on Tuesday, the country's Parliament had endorsed the plan in a vote of 188 in favour and eight against. In the afternoon, President Sauli Niinisto decided, on the proposal by the cabinet of Prime Minister Sanna Marin, that the notification could be sent. The government also appointed the Finnish delegation for the talks with NATO and its member countries. Foreign Minister Haavisto will lead the delegation with Defence Minister Antti Kaikkonen as an alternate, the government press release said. President Niinisto attended the government session online from Stockholm, Sweden, where he and his spouse, Jenni Haukio, are on a state visit. Niinisto's office said the President was scheduled to leave Stockholm for Washington in the US on Wednesday for talks with US President Joe Biden. Sweden's Prime Minister Magdalena Andersson will also be in the US capital on that date. The letter on Finland's intention to join the military alliance is expected to be delivered on Wednesday by the country's Ambassador to NATO, Klaus Korhonen. He told Finland's national radio Yle that he hoped the letters from his country and Sweden could be delivered simultaneously. According to a Finnish government press release, the accession talks with NATO will cover political, legal, resource, information security, and defence and military issues. Finnish officials expect the ratification by all 30 NATO member countries to be completed in four to 12 months. Last Friday, Turkey's President Recep Tayyip Erdogan said his country does not have a positive opinion of the two nations joining the military alliance. Russia, which could see its land border with NATO countries doubles, has repeatedly warned Sweden and Finland against joining the military bloc, saying such a move would oblige it to "restore military balance" by strengthening its defences in the Baltic Sea region. /IANS

Amstelveen, June 18 : Riding on a 70-ball unbeaten 162 by Jos Buttler and sensational 22-ball 66 not out by Liam Livingstone, England on Friday registered the highest-ever score in the history of ODI […]

Dublin, June 18 : South Africa cruised to a crushing 189-run win over Ireland in the final ODI of the tour on Friday. After Laura Wolvaardt (89) and Sune Luus (93) starred with the bat to take the vis […]

New Delhi, June 18 : Every state must recognise its strength, define its targets and develop a roadmap to achieve the same as this is essential for India to become a $5 trillion economy, Prime Ministe […]

By Ashok Nilakantan New York, June 18 : The Bipartisan Gun Law being negotiated in the Congress appears to have hit bumps already with majority of the American citizens and pro-gun lobby Republicans […]