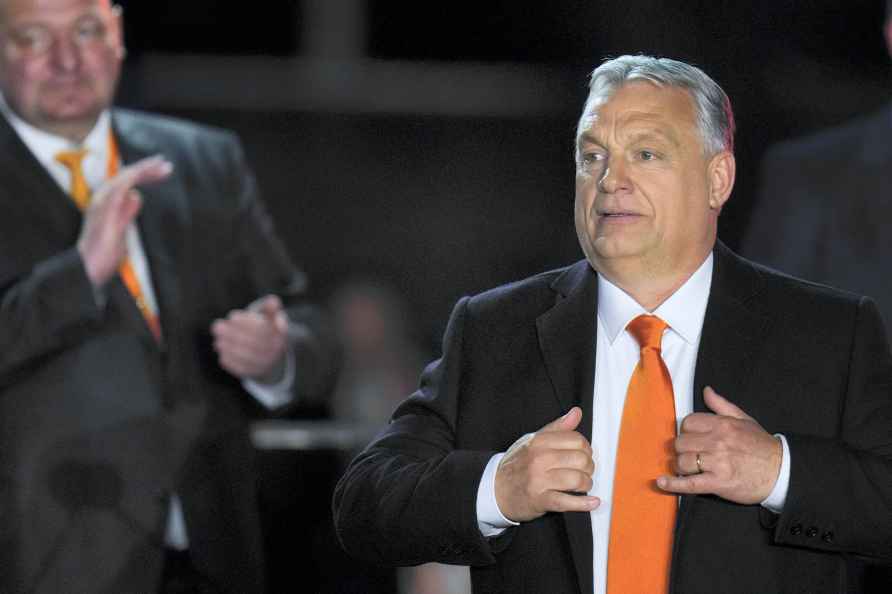 Budapest, May 17 : Viktor Orban took the oath of office for the fifth time as Prime Minister of Hungary. Addressing Parliament on Monday, the 58-year-old warned that difficult times lay ahead, noting the decade began with the Covid-19 pandemic and continued with the Russia-Ukraine war, reports Xinhua news agency. "The war and the following European sanctions created an energy crisis. This and the interest rate hikes have brought high inflation, which in turn will bring a recession and an economic decline," he said. The Hungarian leader spoke out against the sanctions policy of the European Union (EU), saying that he had never before seen sanctions reach their goal. He also said that in spite of the fact that Ukraine supported his political adversaries, the Hungarian government was committed to helping Ukraine. He also criticized the EU, of which Hungary has been a member state since 2004. "Brussels abuses its power every day and wants to force on us things that are bad for us," Orban said, referring to the many disputes his government has had with the European Commission over the last decade. "In spite of that, it is our interest to remain in the EU in the decade ahead of us," he said. Orban was Prime ,inister from 1998 to 2002, then continuously from 2010. His party alliance received 54 per cent of the votes in the parliamentary elections of April 3, a feat that gave him 135 seats of the 199 in Parliament. /IANS

2 deaths reported at US national park in June
Los Angeles, June 17 : Two people were found dead this month at the Death Valley National Park that straddles the US states of California and Nevada,

Bhojpur: A firefighter tries to douse a fire in a train, set by people protesting against Centre's 'Agnipath' scheme, at Kulharia railway station, in Bhojpur, Friday, June 17, 2022. ( /PTI […]