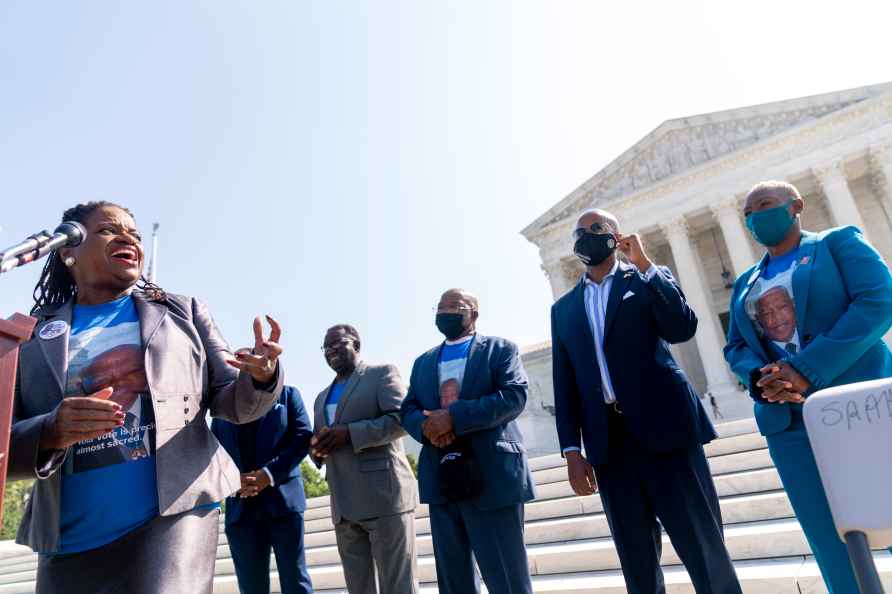 BY VISHAL GULATI Dharamsala, May 17 : The US Special Coordinator for Tibetan Issues, Uzra Zeya has reached India and is expected to meet the Dalai Lama, as wella s officials of the government-in-exile headquartered in this northern hill town Himachal Pradesh on Wednesday, the first major step to the American policy to help promoting dialogue between Beijing and the spiritual leader. Also the high-profile meeting, the first since her becoming the Biden administration's point person on Tibet in December 2021, is seen in the administration in exile a crucial step to pressure China to respect the human rights of the people in Tibet, who are facing extinction of their unique religious, cultural and linguistic identity under China's arepressive' rule for over six decades. A statement by the US Department of State on Monday reads: "Under Secretary for Civilian Security, Democracy, and Human Rights and US Special Coordinator for Tibetan Issues Uzra Zeya will travel May 17-22 to India and Nepal to deepen cooperation on human rights and democratic governance goals, and to advance humanitarian priorities. "She will also discuss partnering with India and Nepal during this Year of Action for the Summit for Democracy. The delegation will include USAID Deputy Assistant Administrator for Asia Anjali Kaur." In a tweet on her arrival, Indian-origin diplomat Zeya on Tuesday morning wrote: "Namaste! Great to be back in New Delhi. Look forward to discussions on advancing #USIndia shared values of human rights, humanitarian support, and democratic governance." After returning from his maiden official visit to Germany, the US and Canada, Central Tibetan Administration (CTA) President Penpa Tsering, an elected leader of the Tibetan community in exile, on May 15 apprised the Dalai Lama about his visit. According to Tibet.net, Tsering called on Zeya on April 25 and discussed on continuous support for Tibet issues. Responding to the US envoy's maiden visit, International Campaign for Tibet Interim Vice President Tencho Gyatso told IANS: "We are excited to see Special Coordinator Uzra Zeya visit Dharamsala, where she can witness firsthand the importance of the Tibetan democracy she's working to support, as well as the dire need to sustain the beauty of the Tibetan culture before the Chinese Communist Party succeeds in its obliteration." Tencho will be in Dharamsala during the visit of the Special Coordinator. According to the advocacy group, Zeya, who serves concurrently as the Undersecretary of State for Civilian Security, Democracy and Human Rights, will be visiting Dharamsala on Wednesday and Thursday to meet the Dalai Lama and Tibetan leaders. During his campaign, President Joe Biden had promised to "work with our allies in pressing Beijing to return to direct dialogue with the representatives of the Tibetan people to achieve meaningful autonomy, respect for human rights, and the preservation of Tibet's environment as well as its unique cultural, linguistic and religious traditions". For Tibetans in Tibet, conditions remain grave. Under China's occupation, Tibet is now the least-free country on the earth in a tie with South Sudan and Syria, according to the watchdog group Freedom House. "We believe this trip can and must translate President Biden's statements of support into the proactive initiatives needed to build on global support for Tibet, including lifting the veil that the CCP's 70-year occupation is an 'internal matter.' Negotiations between Chinese and Tibetan representatives must be restarted," Tencho added. Zeya, who has decades of high-level experience in US foreign policy, including on the issue of Tibet, will then travel to Nepal on May 20-22, according to Nepali media, where she will meet the Prime Minister and Foreign Minister. Among the issues that will confront her is the situation of Tibetan refugees there who continue to face increasing threats to their status due to China's pressure on the Nepali government. In a historic achievement for the government-in-exile in 2020 under former President Donald Trump, the US Senate had unanimously passed the Tibetan Policy and Support Act (TPSA) of 2020 that had been stuck at the Senate Foreign Relations Committee months. Describing as a historic decision, then CTA President Lobsang Sangay had told IANS the Tibetan Policy and Support Act made it official the US policy that decisions regarding the reincarnation of the Dalai Lama are exclusively within the authority of the current Dalai Lama, Tibetan Buddhist leaders and the Tibetan people. "Any interference by the Chinese government officials will be met with serious sanctions and be deemed inadmissible into the US." In addition, the Tibetan Policy and Support Act formally acknowledged the CTA as the legitimate institution reflecting the aspirations of the Tibetan diaspora around the world and Sikyong as the President of the CTA. The Dalai Lama has been living in India since fleeing his homeland Tibet in 1959. The government-in-exile is based in this hill town of Dharamsala. (Vishal Gulati can be contacted at vishal.g@ians.in) /IANS

Is Kerala CPI losing its sheen?
By Sanu George Thiruvananthapuram, Aug 9 : The Kerala CPI's decision to elect a new leadership has triggered speculation about the party losing its

No foul play in land purchase, claims RCP Singh
Patna, Aug 6 : Reacting to the JD-U notice over alleged discrepancies in immovable properties registered from 2013 to 2022 in his name and his family

Mass grave were buried in Bucha

Open graves for unidentified civilians murdered by the Russian troops during Russian occupation are seen in Bucha, on the outskirts of Kyiv, Ukraine, Thursday, Aug. 11, 2022. Eleven unidentified bodie […]