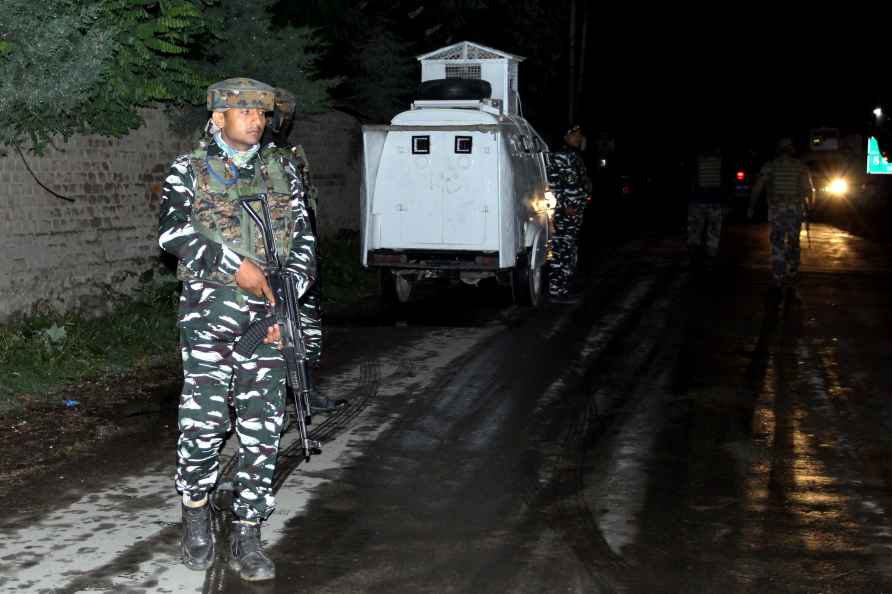 [Baramulla: Security personnel cordon off the area to conduct a search operation after a grenade was hurled at a newly opened wine shop, in Jammu and Kashmir's Baramulla district, Tuesday, May 17, 2022. At least one person was killed and three others were injured in the attack, according to officials. ( /PTI] Srinagar, May 17 : One person was killed and three others were injured in a grenade attack on a wine shop in J&K's Baramulla district on Tuesday. Police sources said that a militant disguised as a buyer hurled a grenade at the wine shop in Baramulla town on Tuesday evening which exploded and injured four persons. "The injured persons were immediately shifted to the hospital where one succumbed to splinter injuries," the police sources said. The wine shop in Dewan Bagh area of Baramulla town was recently opened. The area has been cordoned off and a search operation is on. /IANS

'Agnipath' stir turns violent in MP's Gwalior
[Gwalior: Police personnel inspect railway properties, that were vandalised and set on fire by miscreants during a protest against the 'Agnipath' sche

Thiruvananthapuram, June 16 : The Congress on Thursday dismissed the report that was prepared by the IndiGo Airlines manager as fudged and said it did not represent a true and fair view. The Ind […]

Rome, June 16 : A total of 11.1 per cent of Italy's households were classified as being under relative poverty in 2021, up from 10.1 per cent a year earlier, the National Institute of Statistics (ISTA […]

US to provide $1bn additional security assistance to Ukraine

Washington, June 16 : US President Joe Biden said his administration is providing Ukraine with additional security assistance worth $1 billion, as well as $225 million worth of humanitarian assistance […]

Mumbai, June 16 : Popular stand-up comic Kenny Sebastian posted a picture of an English question paper and it has gone viral for all the right reasons. The photograph showed a section from the c […]